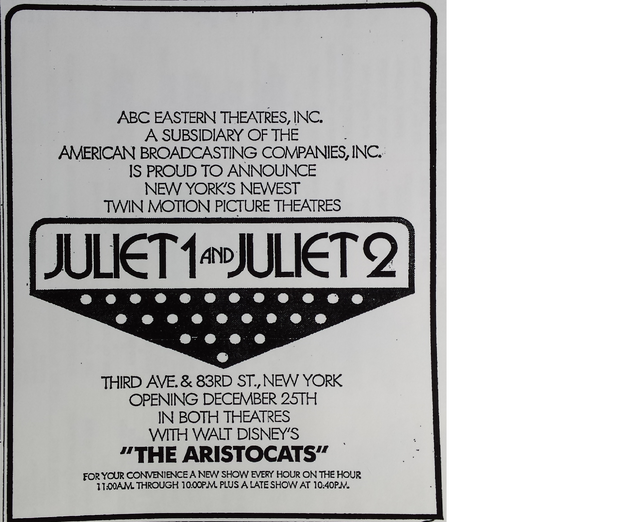 A small two screen cinema located in the middle of the block on 3rd Avenue between E. 83rd and E. 84th Streets, on the west side of the Avenue. It opened on December 25, 1970 with Walt Disney’s animation film “The Aristocats” playing on both screens. It closed in 1978. It was demolished to make way for - yes - you guessed it - another apartment building.

Exit, you’re mistaken. The Juliet was some 20 blocks north of the Columbia/Gemini/UA. A different theatre entirely.

For several years after it closed, the Juliet’s marquee read “A Bo a Hi Do” because the last film that played there was “A Boy and His Dog” with Don Johnson.

The Juliet 1&2 was originally opened by ABC Theatres of NY to exhibit its own ABC Pictures. That production arm did not last too long and subsequently the site played other product. It was named after ABC’s Juliet theatre in Poughkeepsie because the powers to be at ABC were so proud of that theatre and the business that it generated. It was located opposite Vassar College. It has not been a cinema since Sept. of 1990 and is now owned by Vassar. It will soon become a college book store. I managed the Juliet in Poughkeepsie for 13 years so that this information is right on.

The Office for Metropolitan History’s Manhattan NB Database says that the theater at 1474-1478 Third Avenue was designed by architect John J. McNamara in 1969.

Opened With Walt Disney’s “The Aristocats”.