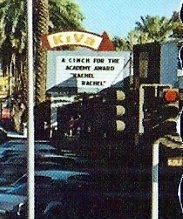 The Tee-Bar-Tee Theatre was opened June 18, 1948 by Martin White. By 1950 it was operated by Valley Theatres Inc. a subsidiary of the Harry L. Nace Theatres chain.

It was renamed Kiva Theatre on October 17, 1955. Steven Spielberg attended Saturday morning matinees at this movie house growing up in Scottsdale in the 1950’s, which included old serials from the 1930’s and 1940’s such as ‘Tailspin Tommy’ and the ‘Masked Marvel’. These old serials that Spielberg watched at the Kiva Theatre as a boy would later greatly inspire his “Indiana Jones” trilogy.

The Kiva Theatre became an adult theatre from 1972-1993. The city applied pressure to have it closed and it was made available for someone to come along and operate it as a classic movie theatre, but there was no interest. It was gutted and is now a mini-mall, with most of the facade still in place.

I do recall adult/pornographic films being shown there as well, but can’t recall exactly when, maybe the 70’s and 80’s.

I worked for a small chain of Art Theatres from 1963-1973. The company was Art Theatre Guild, Inc. Founded by Louis K.Sher in Bexley, Ohio in 1955. The company moved its HQ to Scottsdale, Arizona in 1963. I started my career working at the Valley Art, along with the Kiva and Portofinos in Scottsdale. I was promoted to manager in 1964 and sent to Tucson to operate the original Loft Theatre located at 6th & Fremont, which I also lived in. I also managed the Fine Art in Fresno, The Rockhill in Kansas City, Missouri. The Cinema in Hollywood, the Art Theatre in Dayton along with the Little Art in Yellow Springs, Ohio and The Bexley (then first twin theatre in America) in Bexley, Ohio along with the World Theatre in Columbus and the Opera House in Granville, Ohio. I was the manager of the Bexley and World theatres from 1969 – 1973.

I just learned that I work in the Bar that exists where the Kiva Theater used to be. That movie genius Spielberg would come watch movies as a youngster. I learned the floor was lifted and leveled from a once sloping down auditorium. The narrow stairs going up the projection rooms and the film storage area all still existing. It is now called The Billabong Watering Hole and The Great Australian Bakery.

Very cool. If you could post pics of those areas it would be a great addition to the Photo’s Section.

My dad purchased the All Clean Janitorial service from Ed and Estelle Johnson in 1967. His services were provided for the Valley Art in Tempe, the Kiva, Portofino and Kachina theaters in Scottsdale and Mr.Sher’s office building also in Scottsdale. My dad also did personal handyman and landscape services for Mr. Lou Sher and his son Robert. My dad worked for Art Theater Guild for 25+ years. I fondly remember watching so many movies at the Kachina Theater and especially the Valley Art as we always got free admission :) and it was close to Legend City so my parents would treat us to a movie before our fun night. I recall on the left side exit of the Kachina Theater there was a secret room under the exit steps. I also recall going to work with my dad and my cousin and I would climb the metal bars behind the huge movie screen at the Kachina. Inside the Kiva, there were two Indians on the wall in the lower part of the auditorium, I was so afraid at the time because I was a young kid and to me they looked so scary. The Portofino was so small. The Valley Art had these little round windows, I would always run upstairs near Kent’s office and turn on the auditorium lights. Bill the projectionist would be in the projection room many times. I recall Bill was very nice. He and my parents got along quite well. I also recall watching Wallace and Ladmo live on the stage at the Valley Art and booing Gerald. Haha. Some of the best memories of my childhood was working with my dad at these theaters.

First movie after name change to Kiva was “Gate of hell”. Why the names Tee-Bar-Tee and Kiva?

davidcoppock: Scottsdale long billed itself as “The West’s Most Western Town,” so when local businessman Martin White opened the town’s first movie theater in 1948 he gave it a very western name. It suggested a cattle brand (“T bar T”) and the original marquee was styled just that way, featuring a horizontal bar (with the word “BAR” on it) flanked by two capital T’s.