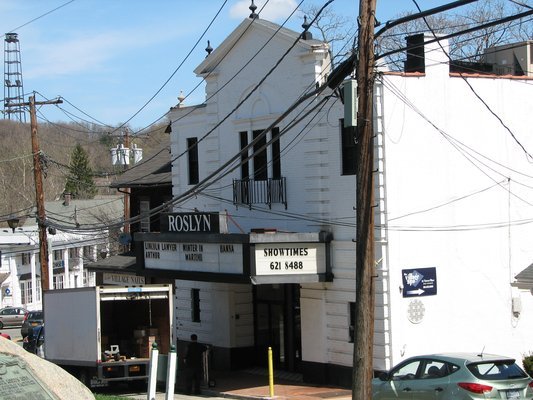 The Roslyn Cinema is located on the main street in Roslyn, just a block or two away from the landmark Roslyn Clock Tower. Opened prior to 1941 when the Roslyn Theatre was operated by the Island Theater Circuit. It had 500 seats and had a big clock with blue neon around it which was placed right near the left-hand bottom corner of the screen, courtesy of the Roslyn Savings Bank.

In the spring of 1981 this was a twinned theatre, after having been a single-screener. It became a triple in 1994 and was made into a quad in 1998 when it was taken over by Clearview Cinemas.

My grandfather did some of the original woodwork inside of this theatre. He lived in an apartment on the top floor of what is now the nail salon, next door to the theatre. My father was born there. I would love to see pictures of the inside of both of these.

This theater was used in THE WORLD ACCORDING TO GARP (1982).

The Roslyn Theater was such a gem. It’s still adorable on the outside with an amazing location but multiplexing has truly destroyed this gem. Programming is great though. But the old Roslyn was so special.

One correction to Seth’s comment above, the clock was not put in place in the 80s. As a kid, I regularly visited this theater and as early as 1974, that clock was already there. During MURDER ON THE ORIENT EXPRESS, it was so annoying. The film was so dark and the theater in a hush… but… then there was that clock. Big mistake to have it next to the screen. The original Roslyn was really a jewel.

Clearview is letting this place fall apart at least on the outside. The marquee is mostly burned out so the cram all the letters to where the lights still work. In addition a lot of their letters are broken or the wrong size.

Come on Bow Tie the marquee still looks like crap

They should have left the exterior the way it was in 1954 before they whitewashed the building and “modernized” the marquee. See photo section.

This is one of 2 cinemas owned by Bow Tie that closed yesterday, along with the Manhasset theater. The owner of the properties sold them in November, both to the same buyer.

Apparently after closing last Thursday along with its sister cinema the Manhasset theater, they are both reopening tomorrow the 19th. It’s films are Dumbo, Teen Spirit (new to Long Island), The Mustang, Hotel Mumbai and The Aftermath. I have no idea who owns them now.

It became a twin in spring of 1981, became a triple in 1994 and in 1998 became a quad when Clearview Cinemas bought the theatre.