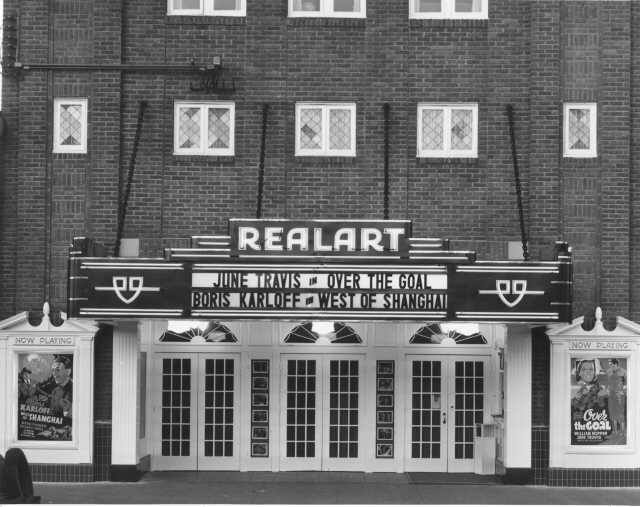 Built in 1919, the Realart Theatre was one of three theatres built and owned by Radnor Pratsch on South Tacoma Way. When the Realart Theatre opened in 1920, the newspaper claimed it was Tacoma’s largest theatre, with a pipe organ and seating for 500 patrons. The theatre had some uncommon and highly desirable features, including a nursery with large windows overlooking the screen so mothers could watch the films while caring for their children, and a room for baby carriage parking. The Realart Theatre operated as a movie theatre for 40 years. Local movie patrons remember standing in line for the Saturday matinee and watching the soft ice cream machine in the market next door to see when a fresh batch of ice cream was ready.

In 1961, the Realart Theatre closed and C.L. Therakauf opened the Realart Square Dance Hall in the building. In 1971, one year after Radnor Pratsch’s death, the adjacent Golden Dragon Restaurant purchased the Realart Theatre and expanded the restaurant. The current main floor remodel occurred at about that time. Although the marquee has been removed, the current first floor façade merely hides much of the theatre’s original brickwork, and possibly even the small leaded glass windows. This building could have much of its historic fabric uncovered and restored.

The Realart Theatre was designed by the architectural firm of Lundberg & Mahon, which formed in 1913. The firm was unique at the time because it offered architectural design and engineering services. Many of the firm’s important commissions were associated with the Catholic Church, and they were responsible for designing South Tacoma’s Visitation Catholic Church (1912). Other major works include: St. Joseph’s Slovak Catholic (1912), Washington Theatre (1913), Lynn Funeral Home (1918), Orpheum Theatre (1919), Holy Rosary Catholic (1920), Sacred Heart Catholic School (1924) and Holy Rosary Catholic in Seattle (1937).

Was this theatre in any way connected to the Realart Films company that did reissues of the old Universal monster movies in the ‘50’s?

I was wondering the same thing when I read the name.

Here is a 1936 photo of Radner Pratsch, one time owner of the Realart Theater:
http://tinyurl.com/5b23s6

Was in the area today and made a photo of what exist of this once fine work of architecture. Regretfully little or nothing remains. The building is vacant and the area in which it resides leaves much to be desired.