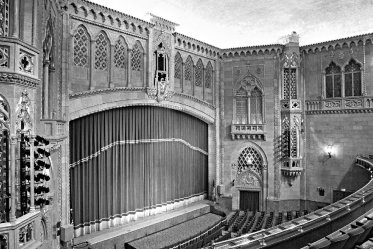 HERSHEY, PA — The Friends of the Boyd (volunteers working towards the survival and reopening of the closed Boyd Theatre) invite you to join us on our field trip to Hershey on Saturday, December 2, 2006, starting at 8:30 AM sharp from the Merriam Theatre at 250 South Broad Street, and returning at 5:00 PM.

You will join us at an exclusive behind the scenes tour of the magnificent Hershey Theatre, with its stunning Venetian design, built in 1933. Then, a delicious buffet lunch awaits you at the Circular Dining Room of the Hotel Hershey, one of America’s landmark historic hotels. There will be time to explore the hotel including its gorgeous public rooms and gardens.

Including round-trip coach fare, theater tour, and buffet lunch, the price is $75 per person. Advance ticketing is required. By credit card, buy tickets by November 22 at www.FriendsOfTheBoyd.org Or, send ticket requests before November 22 to Friends of the Boyd, P.O. Box 30629, Philadelphia, PA 19103. Call 215-567-2970 for more information.

Friends of the Boyd look forward to showing you how meaningful a restored movie palace is to its Pennsylvania community. A restored Boyd Theatre will be equally important for Philadelphia!

Howard B. Haas
(volunteer) President, Friends of the Boyd, Inc.

(Thanks to Howard B. Hass and the Hershey Theatre for providing the photo.)

The sad thing about the Hershey Theatre is that they have all but given up running film. They are down to about four or five features a year – with each title shown one night only on a Saturday night in the fall and spring. Movies are clearly filler only and not well promoted. With its huge CinemaScope screen this is truly a shame.

Good grief. I can’t believe I have NEVER before seen a photo of or heard of this theatre! It’s a beaut!!

I wrote how our visit went on today’s Weekly Update to Friends of the Boyd, www.FriendsOfTheBoyd.org as follows:

By luxury bus, Friends of the Boyd went Saturday to Hershey. Twenty seven volunteers and supporters enjoyed a behind the scenes tour of the Hershey Theatre. See a photo of some Friends in the classical Greek style Lobby:
View link

When we visited BACKSTAGE, we were amazed at the size of the stage! Almost all the large Touring Musicals can be accommodated. The Boyd’s new stagehouse will be even larger!

The Hershey Theatre has been totally restored. Its interior is beautiful throughout. We saw the twinkling stars and the clouds moving across the “atmospheric sky” of the spectacular auditorium. We were told that unlike older theaters such as opera houses, the Hershey’s auditorium was built without columns and so every seat has a perfect SIGHTLINE. The Boyd also has perfect sightlines, and no columns blocking views.

CLASSIC FILMS this season are Citizen Kane, Close Encounters of the Third Kind, Sunset Boulevard, Roman Holiday, Easter Parade, and Some Like It Hot, each with an organ concert first. http://www.hersheytheatre.com/films.html

A professional organist was present to rehearse for a concert the next day, so he treated us to a short concert on the PIPE ORGAN.

The tour guide told us she shows the theater to many SCHOOL GROUPS, telling them about its history and how the decorative features like the Mosaic ceiling downstairs was created (two craftsmen spent two years laying the tiny tiles one square at a time!).

Karen Noonan, President of the Theatre Historical Society of America, is unaware of any other group working to save a movie palace that sponsored a field trip to see a restored theater. Friends of the Boyd are pleased to be first! Like the Hershey, we also plan for the Boyd to be restored for shows, a classic film series, an organ, and public tours.

After the tour, we enjoyed a delicious lunch in the landmark Hotel Hershey, and visited the outdoor gardens and the beautiful public spaces.