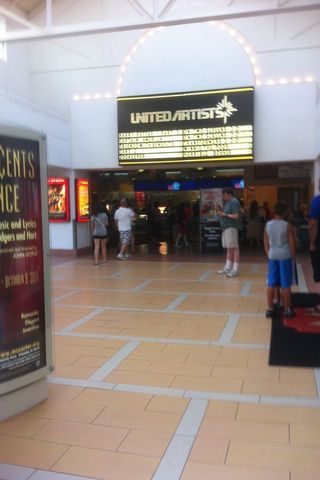 United Artists opened the Movies at the Market Fair 10 on July 17, 1987. It was taken over by Regal Entertainment Group in 2000. All the auditoriums had stadium seating and are ADA accessible. Tickets can be bought on-line through FANDANGO. All seats are ‘rockers’ and the arm rests all lift up to give more room. It was closed on December 18, 2014 to be refurbished and was reopened by AMC in October 2015.

The decision to end the lease was the landlords. Regal had planned on renovating and converting the theater to a dinner and movie format in 2015/2016. The mall decided to weigh its options and ended its lease as it found a new lessee (AMC) which was willing to pay more for the same space.

It’s unfortunate as there is currently a large gap in quality movie theaters in this region. Marketfair may have been dated but it was clean the seats were comfortable and staff knowledgeable. I already miss going here.

I recently visited Marketfair 2/14/15 and nothing has been done to gut the existing theater. Unless they preform some miracle. I don’t see this theater re-opening this year.

UATC08… What movies ran here in a 70mm presentation?

UATC08, I worked on the AMC conversion in Mountainside NJ from end of May to end of Aug 2014. 10 screens. They completely gutted and remodeled the entire place in that time, while keeping at least 4 screens open at all times. Im sure once AMC has their plans finalized, you will see this place redone in 2 to 3 months tops.

Markp I have no doubt AMC could do the renovations within the time frame. This real issue is West Windsor Township, they will drag the inspections out longer than really necessary. I was around for the renovations in 2002 when the theater converted to stadium seating. What should have been quick took much longer due to all the “red tape”. As much as I miss UA I can’t wait for the Mini AMC to open.

Coate my contact who worked at the theater during the 70mm days has since retired. From what I recall there was only one or two showings but he could not recall what played.

The AMC Marketfair 10 had a soft opening this week, and has the new recliners.

This location has the new Laser at AMC