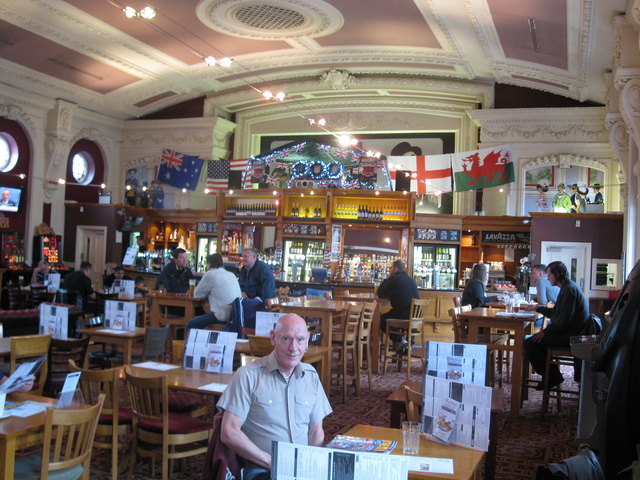 Opened as the Ponders End Picture Palace in 1913 it was located on the corner of Lincoln Road and Hertford Road (today this section of Hertford Road is known as High Street, Ponders End). It was never more than a ‘local’ cinema, the only one Ponders End ever had, and was what is commonly known as a ‘flea pit’.

The exterior of the building was typical of a purpose-built cinema of the period, with decorative swags in the stonework over two semi-circular windows, a corner entrance with a central paybox set inside, with doors on either side of it leading directly into the auditorium. Seating was arranged on one level with no balcony. The auditorium ceiling was curved and divided into panels by strips of elaborately decorated plasterwork and the same treatment was on the side walls, where in the centre of each panel was a gas lamp for illumination. The screen curtains were not motorised but were opened by a member of the projection staff going down to to the side of the screen and pulling on rope chords.

Within a couple of years of opening it had changed its name to Ponders End Electric Theatre, although it retained its gas lit auditorium lights throughout its life as a cinema. In 1938 it came under new management of J.W. Davies who operated a small group of local cinemas and the name was changed to Plaza Cinema, a change which was to be short lived.

All cinemas in the UK were ordered by the Government to close when World War II broke out on 3rd September 1939. Within a few weeks most were open again, but the Plaza Cinema never re-opened. During the war it was used to store aircraft parts. After the war the entrance was used by a shoe repairer for a while.

Later the building was converted into a dance hall with a fine sprung dance floor. It became a community centre known as Howard’s Hall for many years, eventually closing in the mid-1990’s.

The property was purchased by the J.D. Wetherspoon chain of pubs and after re-furbishment re-opened as a pub known as ‘The Picture Palace’ on 23rd May 2001. In 2003 it was awarded ‘Best Pub in Enfield’ by the Campaign For Real Ale.

Here are two photographs of the current J.D. Weatherspoon’s “The Picture Palace' pub. Click on them to enlarge
View link

Gas secondary lighting was the norm before battery powered secondary lighting was possible. It was a secondary source of powere enabling the auidence to find its way out should there be a mains filure or other emergency. It was kept on at low level and was in wall sconceds and the exit ways and exit signs. Often at the Floria Enfield I had to light some 40 of these a day when the handyman was off. They were shut off at night by a main turncock. On the Davies circuit certain;ly we had gas secondary at Enfield and the Ionic, Golders Green until the 70’s, and when I worked for Shipman and King we had gas at The Pavilion Hoddesdon as well. Stephen Wischhusen

The Premier Cinema at Enfield was also part of the Davies circuit. I am perpetually indebted to John Davies, who very kindly let me have the projection equipment from the Premier, which was my local cinema.