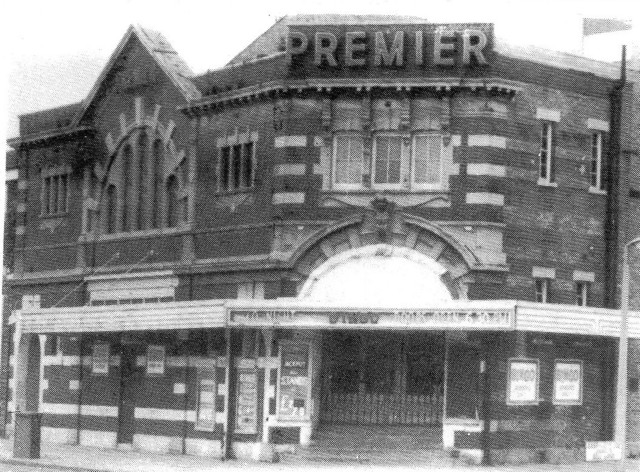 Located to the east of Enfield at Enfield Wash, the Premier Cinema was on the north-east corner of Eastfield Road and Hertford Road. Built by Mr W. Grenfell, a local builder, the Premier Cinema opened on 17th January 1921 with "Wolves of the Night" starring William Farnum.

By 1932, it was being operated by Ben Jay, who also operated the Corner Cinema, South Tottenham. In 1938, it was taken over by Davies Cinemas Ltd.

The Premier Cinema was closed on 19th April 1961 with Paul Newman in "The Left Handed Gun" and Burl Ives in "Wind Across the Everglades". It was converted into a bingo club, and this was eventually closed in January 1985. The building was quickly demolished and housing was built on the site.

The Premier had opened in 1921 as a silent cinema and was converted to sound in April 1930 with the installation of a pair of Western Electric Universal Base sound reproducers. It was the practice of Western Electric engineers to print the date, on which the installation had been completed, in white paint on the underside of the bedplates. The machines at the Premier were â€œTESTED O.K. 15.4.30.â€ However, the first talkie, Sunny Side Up, was not shown until 26th May 1930.

The exact configuration of the machines in 1930 is unknown. The Universal Base was so named because it could take any make of projector head and arc lamp, and it is possible that those already in use were retained. They were subsequently replaced with a Kalee 12 projector head and Monarc lamp. Both first appeared in 1939, although the Kalee 12â€™s specification dates it to the early 1940s. It is also not known whether synchronous turntables for sound on disc were fitted, as some cinemas opted for sound on film only. I removed them in 1977 and one, now fully restored and with a synchronous turntable, is in frequent use in my garage cinema.

I liveds a short walk from the Premier Cinema. In the 1950s children were a lot safer than they are now and, from the age of five I was allowed to go to the Premier on my own. Mum would send me off with a shilling (5 new pence) and often a cheese roll from the local cafÃ© where she worked to help make ends meet in what were not very prosperous times. I then had an agonising decision. Should I spend the shilling on an expensive seat at the back of the cinema, or go in the sixpenny (21/2 new pence) seats and spend sixpence on ice cream. Being an avid film fan, I usually opted for the better seats. In those days seats were priced in blocks of rows, becoming cheaper the nearer they were to the screen.

The Premier belonged to a very small independent chain and was unable to get the pick of the new releases, which went to cinemas in Waltham Cross and Enfield Town, which were part of larger circuits. It survived on a diet of not-so-new releases, re-releases an almost archival material. From my point of view that was a bonus, as I was able to catch up on old Westerns, my favourite being The Lone Ranger, and swashbucklers such as Captain Blood, which had been made in 1935!

In was once thrown out of the Premier. I mentioned earlier that seats were priced according to how near they were to the screen. On this occasion I paid my shilling, which should have entitled me to go in the adult two shilling seats, as children were admitted at half price. However, the cashier had given me a shilling adult ticket instead of a shilling childâ€™s ticket, so the usherette, a fearsome lady by the name of Betty, took me to the adult one shilling seats at the front. I protested in vain so, as soon as the usherette was out of sight, I sneaked back to he adult two shilling seats. The usherette saw me and escorted me back to the cheap seats. I waited until the lights dimmed and sneaked back again to my rightful place in the more expensive seats. Before I knew what was happening I was lifted out of my seat, frogmarched to the nearest exit and unceremoniously dumped outside. I then had three hours to kill as, even though I was in the right, I was not sure that Mum would believe my side of the story.

Many years later, in 1977, the owner of the Premier let me remove the projectors, two very early â€œtalkieâ€ machines dating from 1930. I was let in by the cleaning lady, whom I instantly recognised as Betty. She was such a nice lady and we had a good laugh about what had happened some twenty years before. She did admit, however, that back then she would not stand for any nonsense!

Dad used to take me to church in Waltham Cross and the highlight of my week, on alighting from the bus at the Bell on a Sunday morning, was to look at the stills for the next weekâ€™s programme. Nearly fifty years on I can vividly remember the feeling almost of despair when I saw a notice in one of the stills frames announcing that the cinema was closing that very week for bingo.

The Premier is long gone, but at least I have happy memories, many photos both inside and out and, best of all, the projectors, one of which is fully restored and in regular use in my garage cinema. Every time I run it, I think of myself as a child watching those images on the screen projected by that very machine.

A few â€œbiographicalâ€ notes on the Premier.

It opened as a silent cinema on 17th January 1921 with Wolves of the Night. The first talkie, Sunny Side Up was shown on 26th May 1930. It closed on 19th April 1961 after the final showing of The Left Handed Gun and Wind Across The Everglades and became a bingo hall. It finally succumbed to the wreckersâ€™ ball in January 1985.

In its early days the cinema sufferered from an invasion of the “Swamp Monsters”. It was well known for being partial to fog coming into the cinema due possibly to the open ground to the East of the venue, which would often obliterate the screen and render the shows uninteligble.