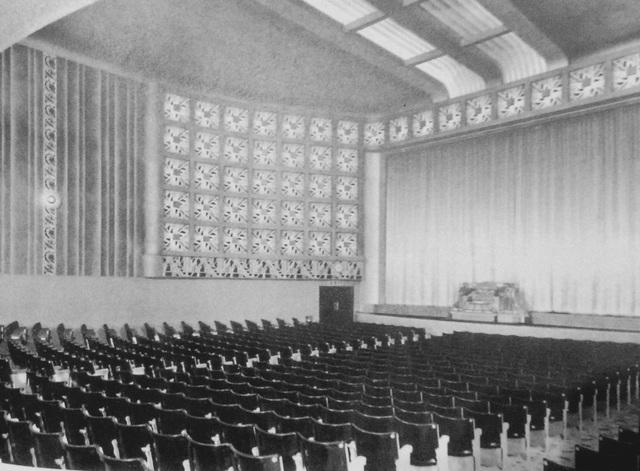 Located in Waltham Cross, Hertfordshire, which today is at the northern extreme of Greater London. Built for the Shipman and King circuit who operated the Regent Cinema directly across the High Street. The Embassy Cinema was designed by the architectural firm Howis and Belcham with interior decoration by noted cinema interior designers Mollo & Egan. The Embassy Cinema opened on 18th November 1937 with Robert Taylor in “His Affair” and Don Ameche in “Fify Roads to Town, and was a most attractive cinema lit entirely by indirect lighting. It had a small stage and a Christie organ formerly installed at the Court Cinema Berkhamsted. The walls were silver grey and the seats red.

It closed for tripling in 1972 and unfortunately the decoration was entirely concealed. A fourth screen was later added in the former restaurant. It was taken over by Cannon Cinemas, and was last operated by MGM Theatres.

All the cinemas closed on 16th September 1993 and the former Embassy Cinema was now de-tripled—and blandly decorated—for its bingo hall use. The Gala Bingo Club was closed on 2nd January 2017.

Originally, there were large windows in the faience tiling on both sides of the entrance. These contained stills and details of forthcoming attractions, which could be changed from inside the foyer. These windows were still there when I left the area in 1970. Subsequently, the front was retiled, so that it now has an almost prison-like quality, unrelieved by anything apart from the entrance and that looks narrower and less impressive than it was.

I think some of these windows could be accessed from the manager’s office, which led off the foyer on the left. Disconcerting to be sitting in there when he changed the stills – could be seen by passers by!
The sister cinema over the road (Regent) became a bingo hall and was later demolished.

Visited this site overnight 23-24th January, 2017, and the Gala Bingo operation has closed, signs removed, and has been stripped out of bingo equipment.

Back in the early 1970s I visited one Saturday morning with friend who was the organist for a cinema in Eastleigh and stand-in for Reginald Porter-Brown at the ABC Southampton. My friend started up the organ (covered in dust) and it played somewhat. The manager then arrived and was none too pleased and turfed us out! According to one website the organ went to Abbess Rodding and is now in store at Greenlaw - in Scotland I presume.