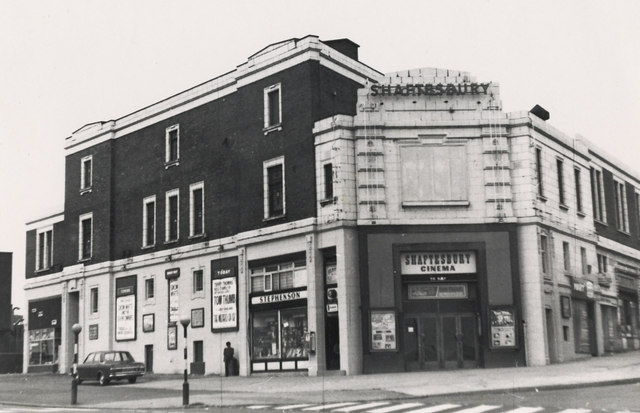 The Shaftesbury Cinema was opened by Sir Charles Wilson MP on Saturday October 20 1928 with the film “Beau Geste” plus, on stage, the Black Dyke Band. The seating capacity was 1,603. Behind the screen was large stage measuring 25 feet by 26 feet which was used to hold live concerts. Five months after opening, a large ballroom was added to the building.

It was taken over by Associated British Cinemas (ABC) from 1939 and they continued to operate it until it was closed on 27th June 1958. Star Cinemas took over and they resumed films until 27th October 1962 which it became a bingo hall.

The front ten rows were removed and the building was used as a Sikh temple. The auditorium was demolished in July 1980 leaving just the entrance, which was used as a café (in 2019 a pawnbrokers) and the adjoining parade of shops.

Particularly interested in finding photos of the interior foyer and auditorium. It’s been a long time but i’m sure my memory holds up. I have photos from the 30s and 70s plus colour shots of its demolition.

I worked at the cinema after I left school 1967. I was there for about 3 years. Then returned a couple of years later. I was always told that the theatre was older. Someone said Victorian. But now I know different. Anyway, at the back of the screen was a very large stage, with old props, torn curtains, and a walkway above from each side of the stage. At one side of the stage, there were steps that lead down to the ‘Dressing Rooms’ Some still had broken baths, sinks and mirrors in them. It was a strange sight. Wondering who may have been in there. But now I know it’s not Victorian… a let down. Still I enjoyed may time there. It was like a close knit family.

Remember the cinema very well .Was a projectionist at the Clock cinema back then. Remember haveing a look at the dressing rooms at the back of the screen of the Shaftsbury It was a spooky place.
Believe it had its own ghost as well!
It seemed the projectionist had a heart attack just before
a show and when it came to start the film he was found dead by his machine.
After that his ghost could be seen stareing at the screen for thechange over cue.

Thanks guys for all the coments and the photos.Brings back memories . I remenber once helping my mate the projectionist clean up after the show and he placed his hand on the curved roof at the side and could actualy push a small section upwards . I wonder if any of you remember him .Norman Elliot .He was a real great guy.