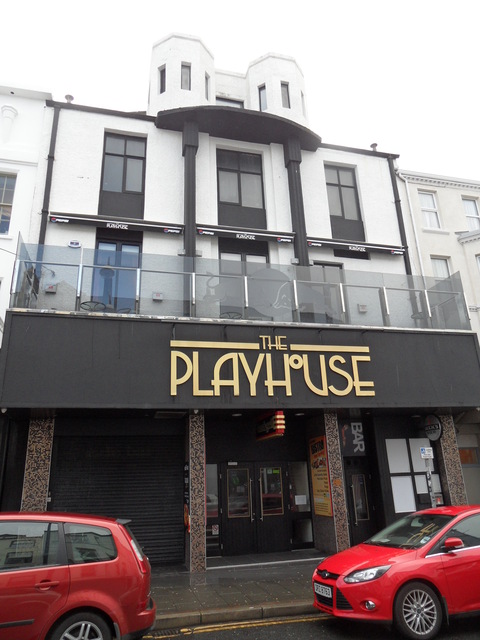 The Majestic Cinema opened on 7th April 1939(Good Friday). It had seating for 792 in stalls and circle levels and the proscenium was 40 feet wide. Initially operated by an independent operator, it was later taken over by the Curran Theatres chain.

Taken over by the Rank Organisation in the 1950’s, they closed it in 1970. The building lay unused for several years, then in 1977, it was re-opened as the Playhouse Cinema by an independent operator. The seating capacity was reduced to 360, using the former circle only, with the former stalls in use as an amusement arcade. It had closed again by 1980.

The Playhouse Cinema re-opened in 1993, and in the Summer of 1997 a second 50-seat screen was created in the former rear stalls area, the the former circle screen now seated 315.

It was closed in 2006, but was re-opened by the Movie House Cinemas chain at Easter 2007. However, by May 2008 it appears to have closed again. In early December 2008, plans were proposed to revamp the building into a combined bar, cinema and theatre.

In 2009 the building reopened with a Sucker Fish Bar in the downstairs area and a nightclub in the former stalls. Films were tried again, but without success, and all these ventures closed down. Then, In early-2014, New Zealander Kris Charteris moved in, and created Kiwi’s Brew Bar downstairs, with an additional bar in the former stalls, and with the intention of using the cinema screen in the former circle to show sporting events and for special occasions.

The surreal fantasy drama “Donnie Darko” starring Jake Gyllenhaal was screened in November 2014, and interest was shown in setting up a film society to present regular screenings. A public meeting was held, at which interested parties were asked to pledge £10 per head as seed money. This was successful, and the Portrush Film Theatre was launched in early-2015 with a screening of “Pride”, starring Bill Nighy & Imelda Staunton.

When I visited on Saturday 3rd August 2019, the Film Theatre presented two films to celebrate the original cinemas 80th birthday. Family adventure “20,000 Leagues Under the Sea” starring Kirk Douglas & James Mason was the early-afternoon offering, while I enjoyed Doris Day & Howard Keel in “Calamity Jane” in the late-afternoon. I also very much enjoyed meeting bar owner Kris and members of the Film Theatre committee, especially Ned. It is wonderful that this historic cinema has re-opened, and I wish them all the very best.

i hope movie house have'nt taken over the playhouse.sadly it will be ‘modernised’ just like the rest of it’s fleet of souless cinema’s.this chain has no real interest in cinema,just raking the cash in sadly.

the playhouse in the 70s