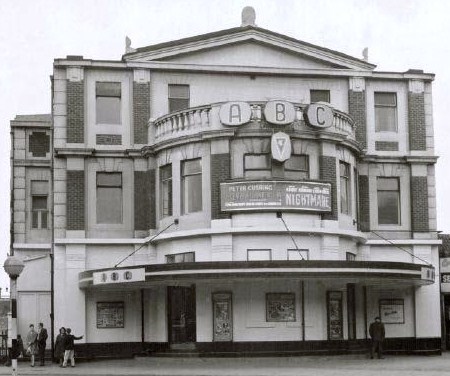 The Grand Theatre was designed by T.V. Woodhouse of Nottingham and opened in 1906 as a live theatre. It was largely rebuilt internally in 1928 to the plans of architect J.H. Tomlinson. It became a cinema shortly after this, despite having an excellent 40 foot deep stage, with a full height fly tower, and a very large number of dressing rooms.

It was acquired by Associated British Cinemas(ABC) around 1930 but not renamed until 1963. It was tripled in 1978 when the the stalls area became Screen 1 with 390 seats, the circle Screen 2 with 369 seats and the stage was adapted as Screen 3 with 171 seats. Later known as Cannon when the Cannon Group took over ABC in 1986, it reverted back to ABC in a management buyout. The ABC closed in 1997 when a new 8-screen ABC multiplex opened nearby.

Inside, the building has been little altered from the triple cinema days. In the snooker hall the curved front of the edge of the balcony (not returned to the proscenium wall) can be seen, together with the lower portions of the altered (CinemaScope) proscenium arch and large stage area. All with a false ceiling above. Upstairs the former Screen 2 remains untouched but in poor condition, with a few broken seats left in situ, the screen has been ripped and behind it is possible to see traces of the original theatre proscenium arch with the upper parts of the very wide CinemaScope arch superimposed. The projection box is stripped. Behind the stage are around ten dressing rooms and on the top two floors of the block the managers flat. All windows have been bricked in and the area is almost unused and derelict.

The exterior of the building, with an unusual semi circular bay in the centre is believed to be intact although covered in the ABC cladding circa-1963. In the circle foyer there are still the covered windows of the bay, and the line of the balustrade is clearly discernable on the cladding. Entrance is now via one of the side exit doors, with the original foyer converted to kitchen/office space.

In March 2013, the building was purchased by a church, who plan to screen films in one of the auditoriums.

UPDATE: The former Grand will be staying with for a few more years yet. It was bought in auction a few weeks ago, and is being turned into a church. The Pastor is a local man with as much nostalgic appreciation for the building as I, so won’t be ripping everything out, and has plans for Screen 2 to be refitted back into a small cinema (not that 300+ seats is considered small these days).

hey surf_digby, just missed you the day you came, thanks for the photo’s. Been in today and got a few pictures of the fly tower, thought you might like to see them. The place is pigeonsville at the mo! By the way, been way up right into projectionist room. Have you ever been up there? Although a miss, there are a few nostalgic items up there. By way of thanks, if you want a tour, let me know, best via facebook. The film-reel cupbaords are still there too. Would they be of interest to you cinema buffs?

@ andirichardson.. Those pics bought back memories.. When I did Relief Management there. I had to go on the stage to go to the Managers Flat to collect the theatre keys. The Stage Tabs when I was there was a proper Theatre flying set.. and The Drenchers.. The Lighting bars where still in place..

anyone got a time machine? would love to see it in all its theatrical glory! Imagination is almost as much fun though! We found out that General William Booth came to Mansfield and spoke at The Grand! (circa 1908).

Hi Andi, I would love an opportunity to tour the rest of the building. I have been in the projectionist room (and had my first “scary pigeon” moment in there), but missed out on the fly tower due to my comically underpowered torch.

Hi Andi. I too am a great fan of the Grand. Have been in a couple of times since it closed as Rileys. Did all floors……in the dark, with a torch. Would love to join you if you are visiting again. A beautiful building that has been saved.

Hi i would love to see the old cinema parts of the building and take pictures is there any way i could?

surf digby Have put comments on your picture of the exterior.