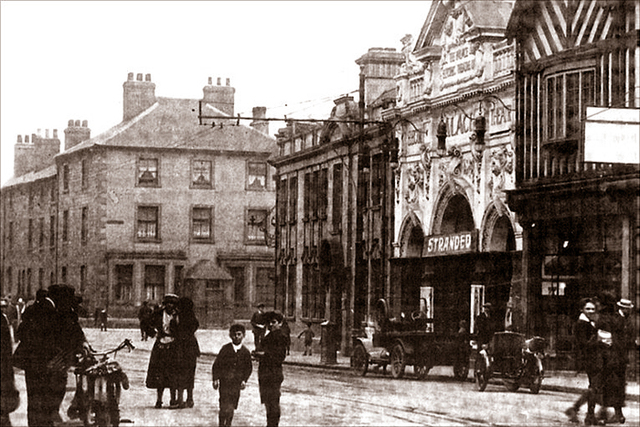 The Palace Theatre started life as the 800-seat Palace Electric Theatre, a cine-variety theatre on 13th December 1910. It was designed by F.P. Cook and Lane, and was used more for films than shows. As one of the smallest of the town’s four cinemas, and independently owned it was the first to close, and on 3rd July 1944 it became a live theatre, closing in August 1954. It was acquired in 1956 by the local authority and re-named Civic Hall, to serve as the town’s live theatre, reopening in March 1957. It has been continually improved since that date; renovated and stalls rake increased in 1956, stage improved 1970 and in 1971 the façade was modernised and it became the Civic Theatre. The circle enlarged 1994, major refurbishment 1997 and in 2006 the theatre reopened after a complete redevelopment and enlargement of the stage and dressing rooms.

The facade has also seen many changes and is now a modern, largely glass affair, replacing at least one interim design from the original arched and open box office original.

The auditorium however is a charming example of Edwardian design with rich plasterwork on both walls and ceiling, and a rectangular proscenium arch. On the side splay walls are ornamental grilles.

History, photographs and memorabilia on the Palace Theatre:
View link

A slideshow of pictures related to the Palace Theatre can be seen here.

Some further background taken from “Made in North Notts” (issue 13 November/December 2019, p.51).

It took twenty-two weeks to build and was Mansfield’s first purpose-built cinema. An advertisement for the grand opening in 1910 refers to it as the Palace Electric Theatre. The seating capacity was 850; 500 seats in the pit, 230 seats in the stalls, and 120 seats in the circle. Admission prices in 1910 were threepence for the lower pit, fourpence for the pit, sixpence for the stalls and one shilling for the Grand Circle. Sound was introduced in 1931, the first talking picture to be screened being “Love comes along” (1930). The building was refurbished in 1937 when pieces of the ornate plaster frontage began to fall on pedestrians. It was replaced with plain rendering.

The cinema became a theatre in 1944, reopening on 3 July. Plans to convert it back to a cinema failed to materialse and it closed in August 1954. The building was bought by Mansfield Borough Council in 1956 for £11,500 and reopened in March 1957 as the Civic Hall. It received a new frontage in 1971 and was renamed the Civic Theatre.