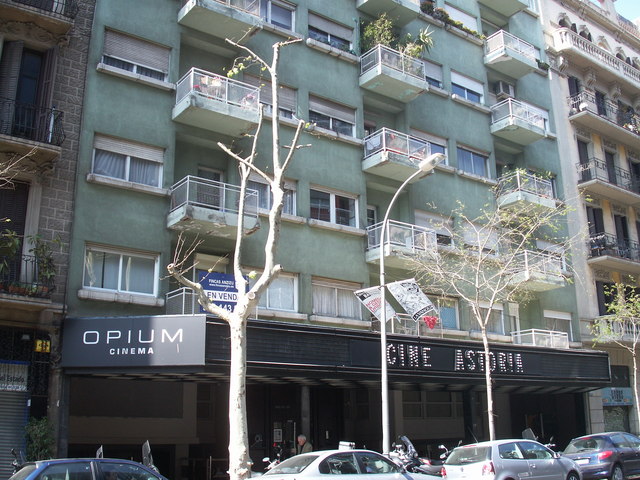 The Cine Astoria is located in central Barcelona’s middle-class area of L'Eixample. It opened on 28th September 1934 with John Barrymore and Carol Lombard in "Twentieth Century". The cinema was the first ‘modern’ style cinema to open in Barcelona and was designed by the architectural firm G.A.T.P.A.C. employing architects Sert, Illescas and German Rodriguez-Arias.

Seating in the auditorium was provided in stalls and circle. The interior is in a ‘streamline’ Art Deco style, with bands of concealed lighting set into troughs. There were two continuous bands of lighting across the front of the circle and three double bands on each side of the proscenium arch.

In the 1930’s many of the Fred Astaire/Ginger Rogers films were very popular at the Cine Astoria.

It has closed as a cinema (since 1995, but date unknown), and in recent years has become one of Barcelona’s most trendy nightclubs known as the Cine Astoria. It also houses concerts. Reds and blacks dominate the colour scheme and there are three bars, a small dance-floor and a ‘VIP’ area. Large projections are shown on the screen.