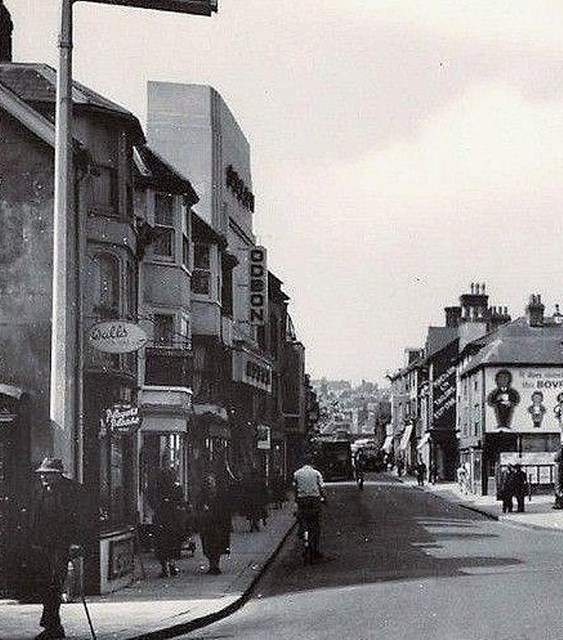 Built for and operated by Oscar Deutsch and his Odeon Theatres Ltd. chain. The Odeon Lewes was located on the fringe of the shopping centre of Lewes and was the second Odeon to be designed by architect Andrew Mather.

It opened on 2nd June 1934 with Cicely Courtneidge in "Aunt Sally" & Laurel & Hardy in “Me and My Pal”. There was a 3-storey high facade, which had a central advertisement board, above which was the Odeon name sign. It was actually a false front as the foyer behind, was only 2-storeys in height and was a long passageway leading to the auditorium. Inside the auditorium, seating was provided on a semi-stadium plan with a seperate raised circle section at the rear which did not overhang the stalls seating. there were 518 seats in the stalls and 468 in the circle. The Odeon was equipped with a cafe/restaurant and a free car park.

The cafe/restaurant was closed in 1951. The Odeon was closed on 2nd October 1971 with Shirley MacLaine in "Two Mules For Sister Sara". It was sold to a propery developer on 20th April 1972 and remained closed and unused until 1982 when it was demolished and shops (in 2017 occupied by the Yorkshire Building Society) and housing was built on the site.

A vintage photograph of the Odeon Lewes, taken not long before it closed in 1971:
View link

Colour photos taken when cinema was derelict but left insecure at the rear. August 1980