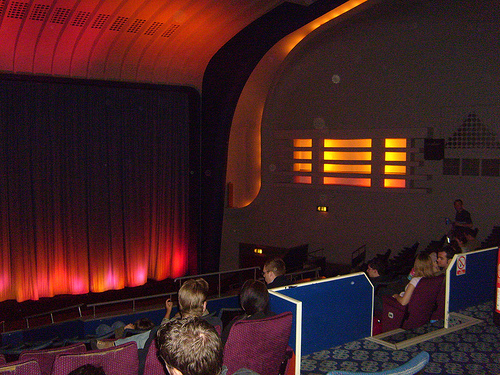 One of the original Oscar Deutsch chain of Odeon Theatres. The Odeon Chester was built in 1936 to the designs of Harry Weedon & Robert Bullivant. Like the Odeon York, the building of this theatre was beset by delays due to the proposed placement within historic city walls and the discovery of Roman archeological remains (some of which remained on display today in glass cases in the upper foyer). It opened on 3rd October 1936 with Ned Sparks in “Two’s Company”. Seating was provided for 1,628; with 1,080 in the stalls and 548 in the circle.

The Odeon Theatre’s at Chester and York are both different from other Odeon’s being built at the time, in that they did not have the distinctive Odeon ‘Moderne’ look externally due to the ruling of the Royal Fine Arts Commission not allowing the usual cream tiled facia.

The exterior is executed in a plain brick with horizontal and vertical channeling. The signage (subject to a rather nasty debate between Chester City Council and Odeon regarding recently submitted plans to change it from the original rare signage to the new rebranded signage) was again different to the usual Odeon signs being rather larger and in "Trajan" lettering.

The interior was very much in the Moderne Streamline style with clean simple lines directing the eye to the screen. The slopping ceiling had concealed lighting in recessed bands towards the screen with a ribbed curved plunge onto the proscenium frame. At either side of the proscenium there were tear-shaped lit recesses.

The cinema was triplexed in 1976 with two cinemas being created in the rear stalls, each seating 122 and the circle was extended forward to seat 802. In March 1991, the circle screen was tripled giving seating capacities of two 151 seat screens and one 406 seat screen. The rear stalls screens remained the same.

The Odeon was closed on 14th June 2007. Since then there has been a groundswell of local support to reopen the building retaining entertainment use. It was purchased by Chester City Council in 2012 and has been altered to create an 800-seat live ‘black-box’ theatre, a small 100-seat single screen cinema and a library within the building. Some of the original Streamline Moderne style features have been retained, but many have been lost. It re-opened as the Storyhouse Theatre & Cinema on 11th May 2017.

Regarding the above comment, it should read The downstairs cinemas, which had been two and three, not one and two as stated above.

Has this article been mentioned before? Extensive feature article by the local Chester preservation group;–

I have written with Steve Howe the history of Chester cinemas under the name of David A Ellis, which can be found on the web.

Some of my above comments are in my article that was written for Steve Howe’s website based in Chester at http://www.bwpics.co.uk/gallery/cinema6.html However the above also contains information that is not on the above website.

The first Sunday screening was ‘East Side of Heaven’ on 3rd November 1940.

Still derelict, with no decision on its future, in April 2011:–

I’ve uploaded 3 photos all soon after closure, with one displaying a poigniant line from the Titanic.

The above picture of the auditorium was taken on the last night 14 June 2007 by David A Ellis.

Some images of the transformed Storyhouse, taken in August 2018