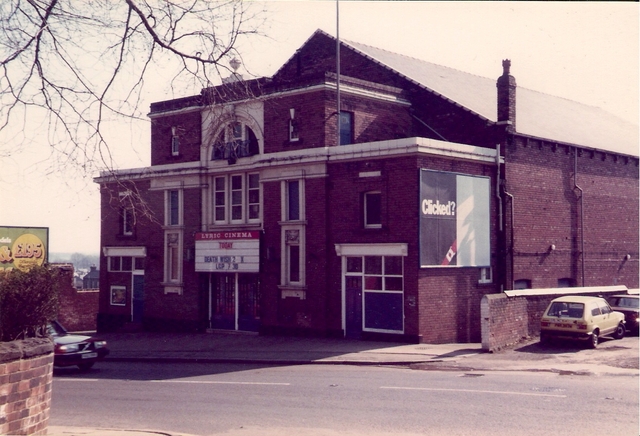 The Lyric Cinema in Armley, a suburb of Leeds, was officially opened on 7th December 1922 by the Lord Mayor, however as the projection equipment was not complete, a musical evening was presented! The first film, "The Three Musketeers" (Douglas Fairbanks) was shown two days later on the 9th December.

The Lyric Cinema has a typical exterior of the time with Art Deco style touches in a brick and dressed stone façade. There is a demi-lune window above the narrow entrance with stained glass and a small shop on either side. The architects were Messrs. Jones and Stocks of Leeds and the proprietors were Messrs. Hobson and Walker (later known as West Leeds Amusements Ltd).

Inside there was seating for around 950 in the stalls and circle. The interior was always considered rather plain, with few decorative features.

The cinema had an uneventful life until the first closure occurred on 3rd January 1976. It reopened under new ownership on the 8th November of the same year, but this was short lived and the Lyric closed again on 30th May 1977.

After 18 months it reopened under the control of John & Rose Kingston on 10th December 1979. Final closure as a cinema happened on 1st December 1988 when "Good Morning Vietnam" was the last film screened here. The opening of a multiplex just a couple of miles away proved too much for a cinema, in need of refurbishments, and unable to justify the expense of them.

In 1992 it was sold at auction with planning permission for Retail / Warehouse use. A large door was punched through the screen wall at the rear, and what little decoration the auditorium had, is thought to have been lost. In 2008 the building is once again closed with a "To Let" sign hanging at the front. In 2010, it was being converted into a church.

IN August 2010 the Lyric has been sold and is undergoing some measure of restoration to function as a church, due to open very soon.

The projection room is apparently intact with two projectors in good condition. A visual art event is planned for Autumn 2011 which should see these projectors restored for the showing of a short film. Adjustments will be made to the current use (church) to allow this. They’re looking for volunteers who wish to get involved, and also for people’s stories and memories of the cinema when in use.

I’ll add more details when I find out more.