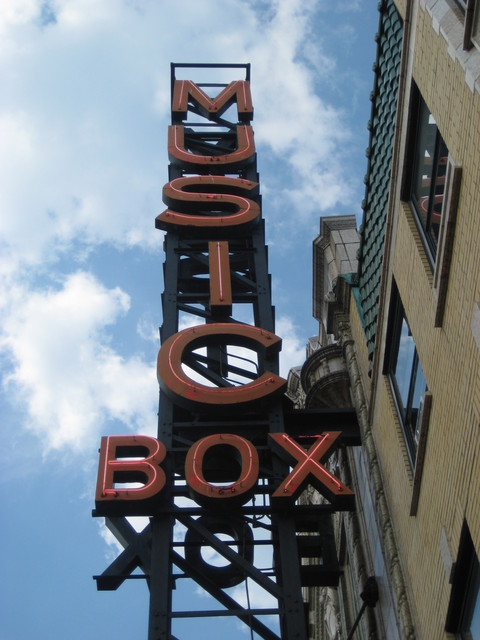 Located in the bustling Southport area of Chicago’s Lakeview district. When it was opened on August 22, 1929 with Morton Downey in “Mothers Boy”, the Music Box Theatre was considered small compared to the much larger movie palaces that were being built in Chicago around that time. Many of these larger theatres, like the Uptown Theatre, were often too large to stay in business throughout the rest of the 20th century.

The Music Box Theatre was designed in an Atmospheric style which was themed with a Spanish Renaissance style, the work of architects Louis I. Simon & Edward Steinborn. It was designed and opened as a ‘talkie’ theatre, but had provision for organ chambers to hold the pipes, which were not put to use until 1984 when a custom made 3 manual electronic organ was installed with its speakers housed in the organ chambers.

Renovated in 1982, the Music Box Theatre reopened in 1983 and has been showing an eclectic mix of classic, foreign, and art house films ever since. In 1991, a small theatre was built in an existing storefront adjacent to the lobby. This second screen was designed to echo the architecture of the main auditorium, as an Atmospheric style, but because of the 13-foot ceiling height, the feel is that of sitting under a garden trellis with stars in the night sky beyond.

Haven’t been here in years. But my memory is that the concession stand was designed to blend with the lobby design. Hopefully whatever they put in during this renovation fits just as well.

Link to news story about the new marquee with video.

Still works for me. You have to left click to highlight, and right click to Open Link in New Tab or New Window.

The new marquee was created by Landmark Sign Group of Chesterton, Indiana. Art director was Jerry Lefere. Senior Technical Engineer was Terry Ambrosini. Many of the zinc castings were supplied by W. F. Norman Corp. of Nevada, Missouri and were identical to the originals. The center urn and scrolls were salvaged from the original marquee and reinstalled on the new structure.

TimeOut Magazine named Music Box one of the 50 most beautiful cinemas on the planet.

Video about how the Music Box coped with the pandemic.