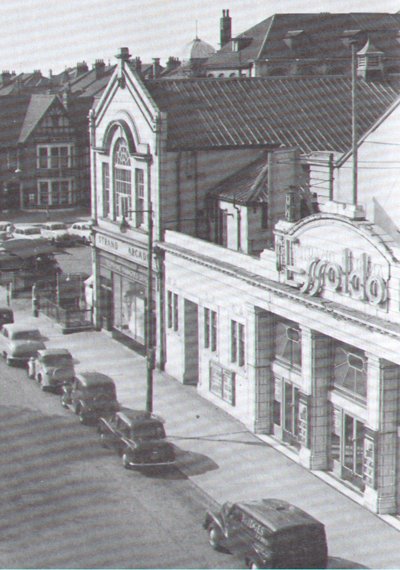 This cinema was high wide and handsome, no upstairs balcony, but magnificent like it was made for CinemaScope (with its 45 feet wide proscenium), but it was actually built in 1909 as a skating rink. In 1911, it opened as a cinema known as the Kinemacolour Theatre. Seating was provided for 1,425 and there were two ways you could enter front and back and I could never work out which was which.

It was re-named Warrior Square Picture Theatre in 1914, then in 1920, it became the Strand Cinema. It was equipped with a pipe organ and a full orchestra. The building was severely damaged by a fire in November 1926, and all that remained was the High Street facade.

It was rebuilt and re-opened on 28th January 1928 with Janet Gaynor in “Seventh Heaven”. It had an enlarged seating capacity for 1,650, and a 16 feet deep stage. A new Kinora 3Manual pipe organ was installed and opened by organist Donovan Ryan. Again there was a full orchestra and the cinema now had a billiard saloon in the building. The facade was a single storey, faced in white tiles, with the builk of the auditorium rising behind. In 1937, it was taken over by Mistlin’s Theatres.

The Essoldo Cinemas chain of Newcastle upon Tyne took it over in June 1955, and fitted it with Cinemascope and steophonic sound, re-opening with Tyrone Power in “Untamed”, in late-June 1955. It was re-named Essoldo in November 1955 and the seating capacity was reduced to 1,550. It retained its organ, which was played regulary into the late-1950’s. The Essoldo was closed on 14th May 1960, and the building was purchased by the adjacent Keddie’s department store. It was demolished and an extension to Keddie’s was built on the site. Today the whole block is now one huge shopping complex.

I passed this cinema in the summer of 1962 and it was open showing ‘Cattle Empire’ with Joel McCrea.

I virtually lived in this cinema as a kid, and I was always enthralled by the lavish poster displays (particularly in the alleyway leading to the “other” box office and entrance, off the High Street) advertising wonderful American sci-fi and horror movies. I was 8 years old, and the X rating kept me out of Tarantula!, Night of the Blood Beast and Demons of the Swamp but my dad took me to see the A-rated Amazing Colossal Man, Earth vs the Spider, The Brain Eaters, and Viking Women vs the Sea Serpent. And it was at the Essoldo in the early 1950s that I had my key, life-formative moviegoing experience when I saw Forbidden Planet, still my favourite film 60 years later.

Just to clarify, when the Essoldo closed it was making money, but it was purchased by Keddies Stores (which fronted onto the High Street, adjacent to the Essoldo) for £35,000 and converted into Supa-Save, one of the town’s first supermarkets. Later, the building was demolished and Keddies store was extended over the site.