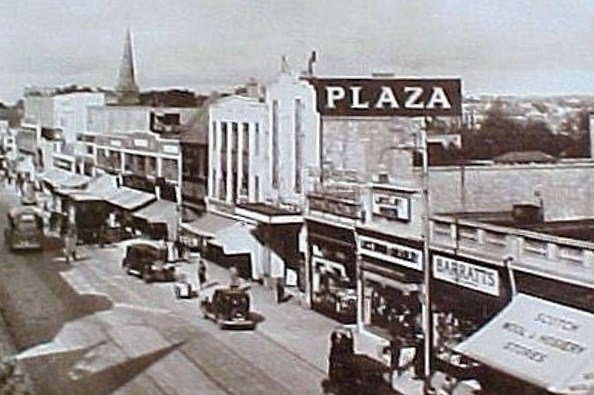 The Plaza Super Cinema opened on 20th January 1930 with Will Rogers in "They Had to See Paris" and Lola Lane in "The Girl From Havana". It was built for Victory Super Cinemas Ltd.

It had a narrow street frontage, with the auditorium built at the rear of other buildings on South Street. Seating was provided for 1,780 in the stalls and 427 in the circle. The Plaza Super Cinema was equipped with a Compton 2Manual/6Ranks theatre organ. There was a stage and four dressing rooms.

After the Rank Organisation took over in 1948, they re-named it Gaumont in 1950. The Gaumont was closed on 15th September 1962. It was demolished and the site is now part of the Liberty Shopping Centre.

I loved the long foyer.

A vintage photograph of the Gaumont in around 1955:
View link