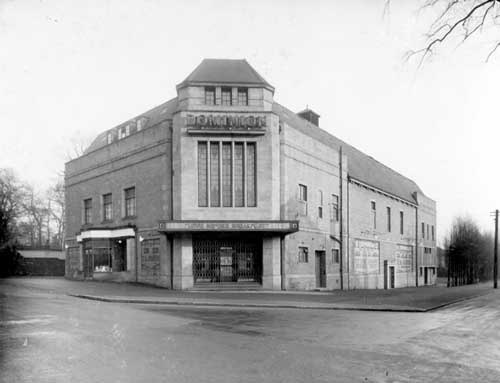 Located in the Chapel Allerton district in the north of Leeds. The Dominion Cinema was opened on 4th January 1934 with George K. Gee in "Cleaning Up". It was independently operated by Messrs. Canfield & Son. The Dominion Cinema was on a corner site, and had a façade of white stone. Above the corner entrance was a squat tower feature, with a tiled mansard roof. It was equipped with a full sized stage and dressing rooms, although these facilities were rarely used.

The Dominion Cinema was closed on 18th March 1967 with George Segal in “The Quiller Memorandum. It was converted into a bingo club. It has since been demolished.

Photos of the Dominion in its bingo days here:–

Another interior photo of the unusual decor here:–