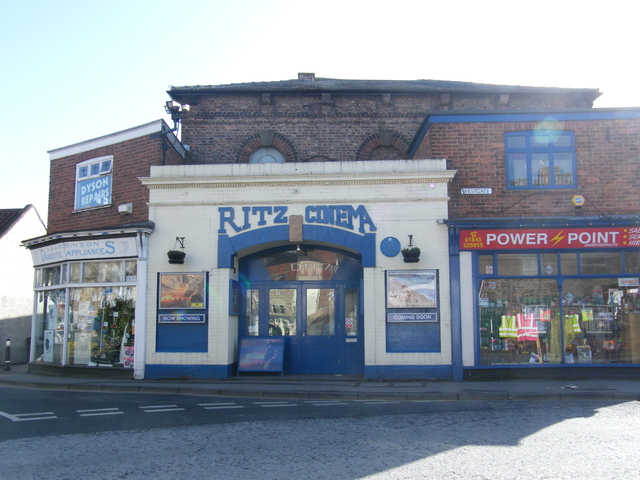 The Ritz Cinema in Thirsk was opened in the early Victorian era as the Mechanics Institute and was converted into a cinema known as the Picture House in 1912. The original silent movie screen still exists behind the present (much larger) screen.

When the talkies arrived the cinema was extended, by building a balcony to increase the capacity to 470 seats, when it re-opened it had the new name of Ritz Cinema. This balcony was reached by a staircase from the main foyer, which linked to an arm of the circle at its lowest level.

It was an extremely popular cinema during 1930’s to 1950’s aided by many forces personnel who were based in the area. It was acquired by Star Cinemas in 1953 who flirted with bingo here and renamed it again, this time to Studio One. By the early 1972 it had closed.

However in 1984 it was brought out of mothballs and resumed showing films until another brief closure in 1994. In March 1995 it re-opened yet again under the Ritz name as a part Thirsk Town Council venture using volunteer staff. This proved successful and continues today, although control has been handed over to the Volunteer Management Committee. Volunteer staff are always needed so if you live in the Thirsk area then contact the box office any evening!

The Ritz Cinema has an unusual layout with the lop-sided balcony and the screen being at the front end of the building. It is an extremely friendly venue, in contrast to the faceless multiplexes, has a rising festoon curtain in front of the screen. Many improvements have been carried out with the introduction of ‘Dolby’ sound, a new screen, better seating and redecoration. It now seats 204 with 128 in the stalls and 76 in the circle. Long may it continue.

We’re part way through a refit of the balcony. The old seating has been ripped out the raked terrace has been pulled up and replaced with a better rake suited to the new seating to be fitted.
More later and a photo to update Ian’s

Exterior view of the Ritz here:

Tne Ritz has become a Co. Ltd.
In order to better access funding
and to put the cinema on a sound footing we are now a registered company. The Ritz Cinema (Thirsk) Limited.
The stalls seating is slowly being repalced with one taken from the now sadly closed Castle in Pickering. We also intend to build a new projection room in order to upgrade the projectors, fit a tower and make room for the inevitable change to digital.
We go from strength to strength, with increasing audiences and improving facilities… independant cinema lives on!

The Studio One was not brought out of mothballs until 1984 not 74 as i worked for Ken when he refurbished and re opened it Had it been 1974 as you state i would have been 10after it been abandoned in march 1972 by star cinemas this i also know as my nan was one of the usherettes there made redundant when Star announced it was to close. They got 5 days notice they were told on the Tuesday it was to closed after its last performance of Dr Zhivargo on the Saturday night and by the monday afternoon its facia signage poster frames had all gone its glass doors all covered in aluminium except for 1 door which was left for entry but the glass replaced by wood. The fire exits office windows and projection suite entrance on the side also covered with aluminium to prevent intruders.