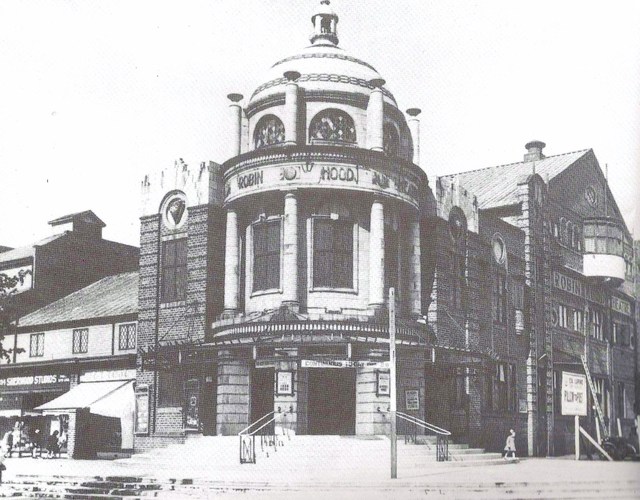 Located on the corner of Stratford Road and Ingestre Road in the Hall Green district of Birmingham. The Robin Hood Theatre was opened on 26th December 1927, with Ramon Navarro in “Ben Hur”. It was built for Cinema Proprietors Ltd. It was named Robin Hood after Robin Hood Lane, which ran off Stratford Road at this point. The Robin Hood Theatre had an impressive terracotta dome over its corner entrance. The foyer had Oak timber beams in its ceiling with half-timber panels on the walls. Inside the auditorium, the auditorium, was decorated like a baronial hall in a Tudor style. Over the proscenium was a painted panel depicting Robin Hood and his Merry Men. Seating was provided in stalls and circle levels. The projection equipment was Ross GC3 projector heads and RCA sound heads.

The Robin Hood Theatre was taken over by the Associated British Cinemas(ABC) chain in October 1929. They operated it until closure came on 7th March 1970 with a re-run of “Zulu” starring Stanley Baker.

The closing manager was Arnold Lewis who seemed to move in just before closure of a cinema. He closed the ABC Aston and Coleshill Street just 8 weeks before. Arnold retired with the closure of the Robin Hood Cinema.

The cinema was demolished and a supermarket was built on the site, in 2011, a Waitrose supermarket.