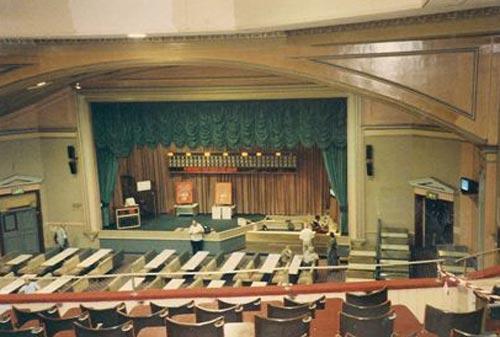 The Gem Picture Theatre was opened on 1st October 1914. It originally had 1,000 seats and a 20 feet wide proscenium.

It was taken over by the Union Cinemas chain on 23rd December 1933, and alterations were made, increasing the seating capacity to 1,260, and including a new 42 feet wide proscenium. It had re-opened by May 1934 as the Regal Cinema.

Union Cinemas were taken over by the Associated British Cinemas(ABC) chain in October 1937.

The Regal Cinema was closed by ABC on 10th August 1968. It was converted into a bingo club, by 1992 it was a Coral Bingo Club, and last operated as a Gala Bingo Club. In 2011 the building stands empty and ‘For Sale’. By 2020 the front of the building was in use as a dental practice and the auditorium was a gymnasium.

In December 2014 (see my photos) the front of the building was still boarded up. However, there was no sale board, and a gym occupies at least part of the building, with its entrance round the side. According to posters still on display by the former entrance, bingo ceased on Tuesday 22 April. This could have been 2003 or, perhaps more likely, 2008.

Cinema Theatre Association member Audie Phillip visited Gravesend in September 2020, and found that the building was occupied by Dental Care Centre (at the front) and NRG gym (at the rear).