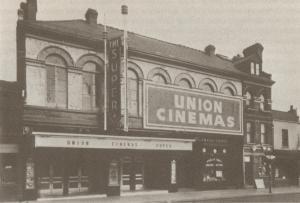 Opened as the Public Hall in 1891, it could seat 1,300. Initially, there were two halls, one above the other, and the upper hall began use as a cinema in 1908. In 1909, the lower hall was brought into cinema use, and was known as the Popular Picture Palace.

By 1915, it was presenting live performances as well as films, and was known as the Palace Theatre, soon becoming a full time cinema and known as the Empire Picture Palace. By 1925, it had been re-named London Theatre, and in 1930, gained the name Rivoli Music Hall. November 1932 brought in another re-name to Regent Cinema.

The Regent Cinema was taken over by the Union Cinemas chain in 1933 and was re-constructed internally to a single space by architect A.H. Jones. It re-opened on 16th September 1933 as the Super Cinema with film star Anna Neagle attending ‘in person’, and the opening film was Clive Brook in “Cavalcade”.

Now with 954 seats, it had a modern interior and an unusual ‘fan’ shaped 24 feet wide proscenium. The stage was 14 feet deep. It was equipped with a Compton 3Manual/5Ranks organ which had an illuminated console on a lift, that was opened by organist Alex Taylor. In 1936, the Compton organ was removed to a newly built Union cinema in Scunthorpe.

Union Cinemas were taken over by the Associated British Cinemas(ABC) chain in October 1937.

ABC closed the Super Cinema on 23rd November 1958 with Kenneth More in “Next To No Time”. It was demolished (the facade was retained) and shops, including a Bejam Freezer food centre were built on the site. Today a Bombay Masala Indian Restaurant operates from the address.