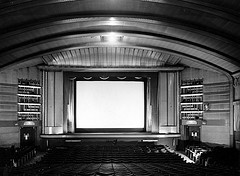 Located in the small West Yorkshire town of Brighouse at the corner of Bonegate Road and Bradford Road. The Ritz Cinema was built for and operated by the Union Cinemas chain. It opened in March 1937. Seating in the auditorium was on a stadium plan, with a raised stepped section at the rear.

Union Cinemas were taken over by the Associated British Cinemas(ABC) chain in October 1937. They closed the Ritz Cinema on 24th June 1961.

It was converted into a bingo club, which only lasted for ten weeks. It then became the New Ritz Ballroom. A 3Manual/10Ranks Wurlitzer organ was installed. The instrument was originally installed in the Gaumont Oldham, prior to its removal in 1961. The Wurlitzer was a popular feature of the Ritz Ballroom for many years, but it was removed quite recently (around 2009?).