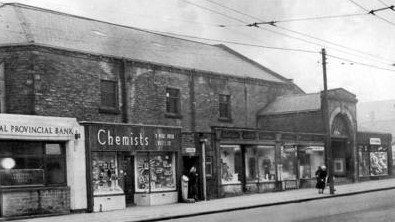 Located in the Wibsey district of Bradford. The Cosy Cinema was opened on 4th June 1930 with George Arlis in “Disraeli”. The stone built building had its entrance to the right-hand end, and the auditorium ran parallel to Fair Road behind a row of single storey shop units. It had a 20 feet deep stage and two dressing rooms.

The Cosy Cinema was closed on 4th March 1961 with Michael Craig in “Doctor in Love”. It was purchased by the Co-Operative Society and converted into one of their supermarkets. In 1980, they demolished the building to build a new supermarket on the site.

There is additional historical detail about this theatre on this webpage.