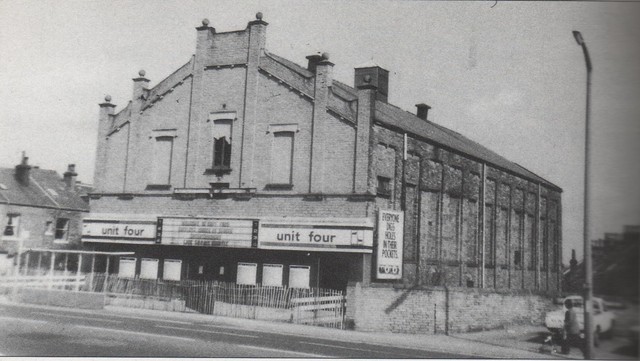 This cinema opened in 1911 as the Prince’s Hall Picture House. It was built on the site of the Shipley Pavilion to the design of architect William Illingworth. The original seat count was in approximately 1,100. The cinema had a wrought iron and glass canopy that ran along the entire length of the facade, a black and white marble entrance floor, and column-free auditorium interior decorated in green and cream.

In 1972 while under the management of the Star Cinemas chain, the cinema was transformed into a quad by creating four auditoriums in the stalls area with seating capacities of 100, 86, 134 & 105, each with a distinctive colour scheme. The cinema was re-named Studios 1, 2, 3, 4. The projection system used an unusual combination of periscopes and mirrors; there was no direct projection on any of the four screens. The seat count was reduced to a total of 450. The balcony was closed off and unused, though there may have been some thought that it might later become a fifth screening room.

In 1978, the cinema was renamed the Unit Four Cinemas when the Hutchinson Group took over. Storm damage to the theatre’s roof closed the cinema in 1980; it was reopened in 1981. In 1999, it was taken over by a partnership of two solicitors and renamed the Shipley Flicks after the partners personally funded a refurbishment of the cinema including the addition of Dolby Surround Sound. But by 2000, dwindling attendance, competition from newer multiplexes further away, and offers from developers finally doomed the ninety-year-old building, and it was demolished in 2001. A block of flats now occupies the site.

Additional historical detail and pictures are available on this webpage.

The conversion was designed and carried out by Modernisation Ltd., inc the Mirror system of projection.

The original projection room was at the rear of the stalls.

In the quad arrangement, the two ‘studios’ immediately in front of the projection suite were each served by two mirrors giving a downward-then-forward firing ‘periscope’ arrangement. The pair beyond them were served by an upward-then-forward firing ‘periscope’ which took the beams above the ceilings of the nearer pair and through glazed openings into the distant pair. As ever, with such mirror arrangements: the light scatter ruined the image contrast; the imperfect geometry alignment of mirrors distorted the images; and the focus was poor and got worse over time as contaminating films of dust and grease were deposited on the mirrors. The screens were solid surfaces with the sounds coming from loudspeaker boxes (of no great quality): one screwed on the wall below each screen. The access corridors were not particularly wide and were rather claustrophobic.

After Star Cinema Unit Four Cinema circuit belonged to Brian Tattersall. When he died Apollo took over his circuit.