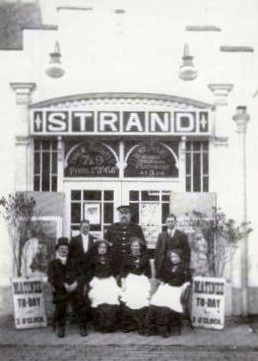 Located in the Wolverhampton inner city district of Whitmore Reans. The Strand Cinema was built and opened on 22nd July 1912. It had a seating capacity for 350. It was closed in September 1923, to allow for a larger cinema to be built on the site.

The West End Cinema Theatre was a 750-seat purpose built cinema, designed by Birmingham architect Leonard Voisey. Seating was provided in stalls and circle levels. It was opened on 25th August 1925. From 1934, it also hosted the Wolverhampton Film Society, who screened classic silent films. At the end of the 1930’s, it was equipped with a Hammond, Model A organ, which had an illuminated console.

The Rex Cinema closed briefly in 1956, re-opening on 30th June 1956, but it finally closed in December 1956. It remained unused for several years, then became a warehouse for Woolworth’s. The building has been demolished and the Avion Shopping Precinct now stands on the site.