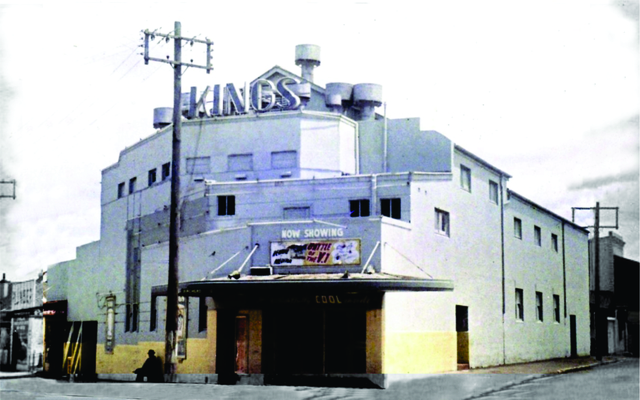 Balmain is a suburb in Sydney’s inner west, once an industrial center with a power station, soap factories, foundries, shipbuilding and even a coal mine. Today is is a gentrified locale which attracts younger people who like the harbour views. The Kings Theatre was the fifth to open in the small circuit of which only the Kings Rose Bay North was not a revamped older building.

The Kings Theatre was constructed on the shell of the former Sewell’s Picture Show, which had later become the Roxy Garden Theatre used for vaudeville. This site had also seen use as a chocolate factory, a skating rink and a dance hall. The awkward triangular site didn’t allow for an imposing front and there are none of architect Guy Crick’s usual Art Deco stylings that made future Kings Theatres instantly recognisable.

The Kings Theatre opened on Saturday July 4th 1936 with Harold Lloyd in “Milky Way” and Jackie Coogan in “Tough Guy”. The 60 x 120 foot auditorium was decorated in soft autumn tonings and well fitted with heating and cooling systems. Seating was provided for 775 in the stalls and 223 in the circle.

The Kings Theatre was taken over by the Greater Union Theatres chain in May 1946. It was closed on 25th April 1959 with “Battle of the V1” and “Gypsy and the Gentleman”. Today a courtyard style modern apartment building fills the site.

My uncle took me to this cinema for a few Sat. afternoon matinees back in 1949, I was 6 yrs old. It was a lovely cinema inside. I recall seeing Digit Dick aussie cartoon creation. We mainly went to Balmain Hoyts other times.