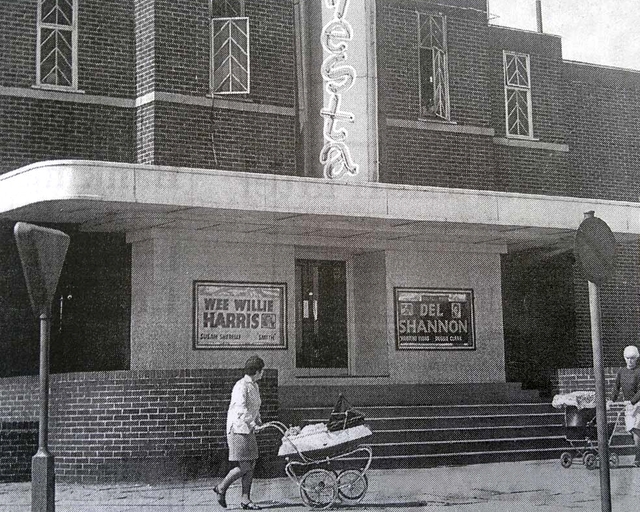 Located in Norton-on-Tees to the north of Stockton-on-Tees, County Durham. The Kinematograph Year Book for 1947 lists the Moderne Cinema in Norton-on-Tees as being owned by the Superb Cinema Company Ltd., who also owned the Norton Cinema almost opposite across Norton Avenue. The Moderne Cinema had Western Electric sound, a 32ft wide proscenium and 1,202 seats. Its 1947 prices ranged from 10d to 1/9. Shows were continuous, in the evenings only and booked at the hall. Prices apart, those essential facts remained unchanged.

The Moderne Cinema was opened in 1938, and features on a website in someone’s war-time memories where it is stated that “the local air raid siren was mounted on the cinema roof and the area was bombed”. It was designed in a Streamline Moderne style by architect T.H. Turnbull, and interior decorations were the work of interior designer John Alexander of the Newcastle-based firm of M. Alexander & Son.

In 1965 the building became the Fiesta Club, an example of that phenomenon of the time: the essentially working people’s dining, drinking, cabaret clubs which booked national and international top performers. (Roy Orbison, Dusty Springfield, The Drifters, Cliff Richard, Shirley Bassey, Lonnie Donegan, Tommy Cooper and Olivia Newton-John, all of whom stayed for a week’s appearances.) The owners, Norton Entertainments, also operated the Fiesta Club in Sheffield. The Fiesta business was voluntarily wound up in 1976.

Thereafter, the history is hazy. For some time the building operated as the Colosseum nightclub, the owner of which was allegedly a drugs baron. In 1995 the place was the subject of a police raid and the club was shut down. The owner fled to Cyprus but was arrested and extradited in 2009.

Since 2003 the building has been the Destiny Centre of the Destiny Church, “a Pentecostal, purpose-driven, church”.