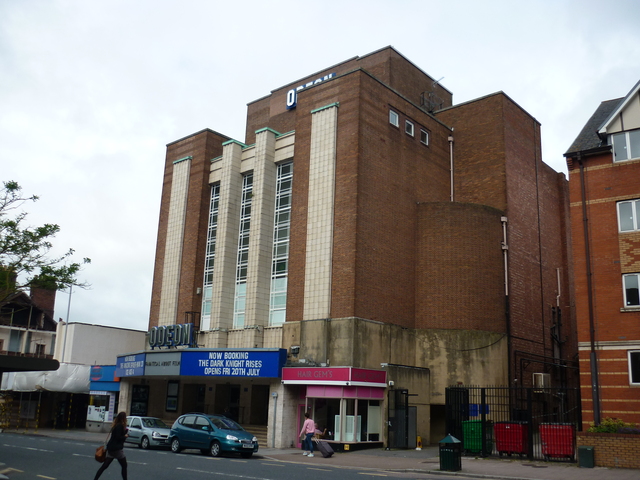 Robert Bullivant of the Harry Weedeon practice was the principal architect for the Odeon Exeter. It opened on 30th August 1937 with Errol Flynn in “Charge of the Light Brigade”. It had 1,176 seats in the stalls and 744 in the circle (total 1,920).

On the facade the four vertical columns used to extend above the parapet but have been capped.The canopy is also modern - and far less interesting than the original.

Inside the auditorium was a very stylish affair with ribbed plasterwoork descending along the ceiling to the top of the proscenium, more ribbed plaster swooping down from the circle to the sides of the arch meeting up with more ribs, surmounted by shallow (possibly painted) figures above the side stalls. Lighting was entirely indirect.

The circle foyer was very spacious with fluted columns and bas-relief panels - it was lit by the tall windows on the front facade.

The cinema suffered war damage in May 1942 which was not fully repaired until 1954. It was later modernised in the 1960’s and closed for tripling in 1972. This was a standard Odeon affair with the circle and front stalls (disused) becoming screen 1 with 744 seats and two mini cinemas constructed under the balcony in the rear stalls area with 119 and 118 seats.

The Odeon is now the sole survivor of the main circuits in the town who each built cinemas (Gaumont and ABC) and remains a popular cinema - providing that a multiplex does not appear, it should be with us for many more years.

A 1971 exterior photograph of the Odeon, Exeter here:
View link

A photo from just before the rebranding took place :–

In July 2018 I was asked by Claudia Materna, at ODEON, for permission to use one of my October 2000 images in a display the company was creating, at the cinema, to celebrate this historic movie palace. I was only too pleased to provide this, and the history wall, a permanent installation, was unveiled in October 2018. (It is situated in the upper foyer.) In these days of ever more futuristic, state-of-the-art all-digital multiplexes (such as ODEON’s own Luxe brand) it is heartening that the company is so mindful of its proud heritage. (Similar history walls have been installed at the ODEONs at Salisbury, Weston-super-Mare and Glasgow Quay.)