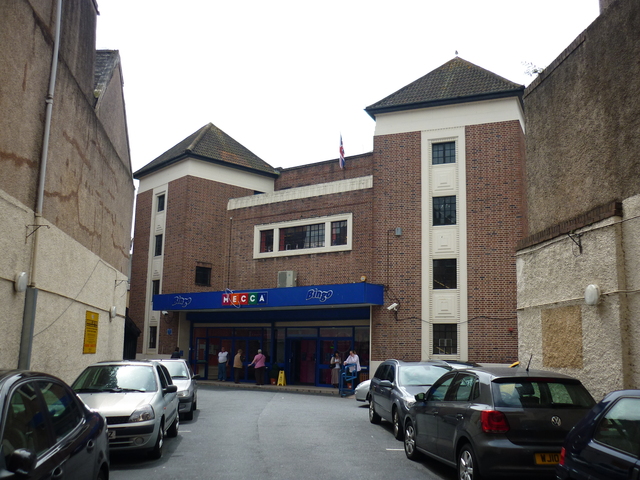 A fine large stadium style cinema, designed by Willam H. Watkins for the Gaumont/Albany Ward circuit, and opened as the Gaumont Palace on 16 May 1932 with Renate Muller in “Sunshine Suzie” and Ursula Jeans in “Once Bitten”.

The cinema is unusual in the fact that it does not have a facade to the street - there is a gateway giving access to a courtyard and the actual cinema is freestanding.

The auditorium was dominated by a vast dome in the centre of the ceiling containing several ribs of waved plaster and a central light. There were also pendulent light fittings towards the four corners of the ceiling. The side walls carried decorative panels depicting Medieval life! The proscenium was 56 feet wide, a stage was provided as was a Wurlitzer 3Manual/9Rank organ which was opened by Frederick Bayco.

It was re-named Gaumont in 1937 and like the Odeon, the Gaumont suffered War damage in May 1942 which meant that was closed for over a year. The auditorium ceiling was badly damaged and was repaired, but was not a lavish as previously. The Wurlitzer organ was damaged and never replaced.

It lasted on films until 4th May 1963 when it was the first of the main cinemas in the town to close (both the Odeon and the ABC continued, and each was eventually tripled). It immediately reopened as a Top Rank Bingo Club and continues in this role today as a Mecca Bingo Club, largely unaltered and well worth a visit.

The Gaumont is a Grade II Listed building.

A vintage photograph of the auditorium, taken around the time of the opening of the Gaumont Palace:
View link