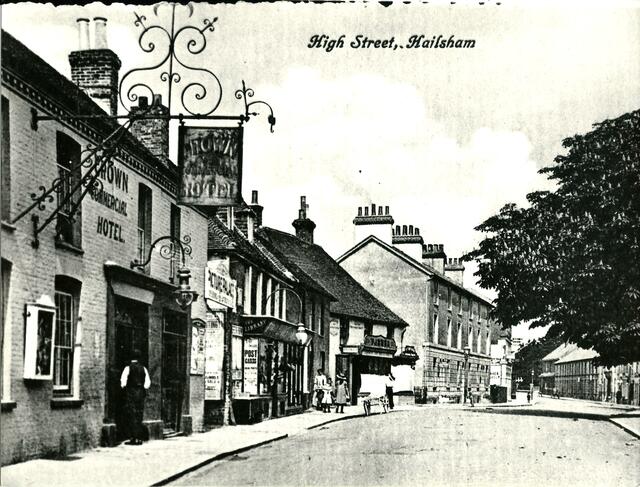 In Hailsham, East Sussex, the town’s first cinema is said to have been a converted barn off the High Street, run during World War I, at least, by Alfred Shipman, who would go on to co-found the Shipman & King circuit.

There is no record of this cinema in the 1914 Kinematograph Year Book (KYB); the next edition I have access to is for 1923, which does list a Palace Picture Theatre, but with no other details.

I then jump to the KYB for 1928, by which time the Palace Picture Theatre has gone, and the Pavilion Cinema (see separate Cinema Treasures entry) has appeared. Presumably this later cinema saw off the earlier, and much more basic, picture house.

The photograph, courtesy of the Cinema Theatre Association Archive, supports this narrative, and shows a name board, Picture Palace, over an alleyway at the side of the Crown Hotel, on the High Street, quite possibly leading to a converted barn. (Given this name board, I have taken the name Picture Palace for this cinema instead of the KYB’s version.)

I believe the Crown Hotel still stands, and is now the Grade II listed Corn Exchange hotel. If so, the alleyway at the side is also still there, but presumably the barn has long been lost to redevelopment.