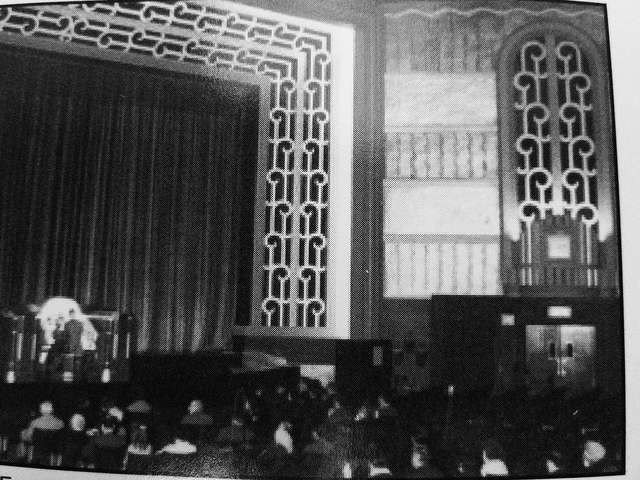 The Century Cinema opened on 25th July 1936 with the film “When Knights Were Bold” starring Jack Buchanan and Fay Wray. It was designed in a splendid Art Deco style by local Clacton architect G.H.B. Gould and had seating for 1,743 (1,428 in the stalls and 486 in the circle). There was a café/ballroom located on the mezzanine floor level above the entrance.

There were full stage facilities and six dressing rooms provided and for the first few months of operation it had a cine/variety policy. A Christie 3Manual/7Rank organ was installed that had an illuminated console and it was opened by Frank Matthew.

The Century Cinema was taken over by the Essoldo chain in 1946 and re-named Essoldo. In 1967 the organ was sold and removed, to be installed in the United Reform Church, Ipswich.

Classic Cinemas took control in 1967 and the building was twinned with a Bingo club operating downstairs in the former stalls area and a cinema converted out of the former circle upstairs that had been extended forward to provide 600 seats which became Classic 1. At the same time a second screen opened as Classic 2, seating 187 which was a conversion of the former café/ballroom area. Mecca Ltd. were the next operators of both the cinema & bingo club.

The building has gone through several other changes of ownership through the years and was operated by Gala Bingo Clubs who operate the bingo hall downstairs and the cinemas upstairs. These were the only cinemas operated and booked by Gala, although they operate many former cinema buildings as bingo clubs.

In August 2005 both screens were re-furbished with new seating, carpets and decoration and newer projection facilities were installed. Flicks 1 now seats 420 and Flicks 2 seats 133.

The Flicks 1 & 2 Cinemas was closed on 3rd November 2012. Gala Bingo continued in the former stalls area.

In June 2013, it was taken over on a 15 years lease by Adam Cunard of Picturdrome Electric Theatre Company and re-opened on 21st June 2013, reverting back to the original Century Cinema name. Over 100,000 Pounds was spent on the two auditoriums and the very latest digital equipment was installed. In June 2018 the Gala Bingo Club was re-named Buzz Bingo Club.

The architect of Flicks (G.H.B. Gould) also designed the 800 seat West Cliff Gardens Theatre on Tower Road, Clacton-on-Sea. It has been operating as a live theatre since opening on 25th May 1928 and continues today as the West Cliff Theatre. It has never screened films, so doesn’t qualify for listing on Cinema Treasures, but I thought I would mention it here.

This cinema is re-opening on June 21st under its original name, Century Cinema!…

Gala Bingo and Picturedrome Electric Theatre Co Ltd are delighted to announce that the former Flicks Cinema will re-open on June 21st, under its original name of Century Cinema. The cinema which has been at the heart of the local community, will also be celebrating its 75th anniversary. Managing Director Adam Cunard from Picturedrome who will be operating the cinema said “We are delighted as a Company to be coming to Clacton, since the cinema closed we have been working closely with Gala Bingo to re-open the venue and are delighted to announce today that we are opening in a few weeks time. The cinema has under-gone a makeover and will have many new exciting features from when it closed last October, we are excited to welcome customers both old and new back”

Peter Willans, Head of Property from Gala said “ We recognise what a valuable part the cinema played within the local community and in Picturedrome we are delighted to have secured a community focused operator for the next 15 years. We look forward to working in partnership with Picturedrome, to deliver the best cinema and Bingo experience in Clacton.”

The cinema which will re-open on 21st June will have a 4K Sony Digital projection, a feature that can’t be found in other cinemas in the area, Dolby 7.1 Digital sound to make the experience better than ever, air conditioning and heating in both screens, there will also be the added benefit of satellite technology which will enable the cinema to host operas, ballet and theatre productions in the future.. exciting times ahead. In addition to these new facilities, the cinema will also be operating an Online Booking service, and continue to offer great deals to customers,such as only charging £2.50 from Monday to Friday and £3.50 Saturdays and Sundays.

The reference to Classic Cinemas taking over in 1967, when it is implied that the bingo with twin cinemas conversion took place, is incorrect. Annoyingly, as with many of the frequent mistakes in the interesting, if consistently inaccurate website, this error has now filtered through into the forthcoming attractions mag that is published by the current operators and available in the foyer of the cinema. This contains potted histories of the four Picturedrome sites in a corporate advert, and repeats the error that it was converted for cine-bingo in 1967 (which it wasn’t). I have a detailed and (properly researched) history of the cinema and would be happy to supply details should anyone require further details about it.

Enjoyed reading your comments. But can you help me with this one?

Above the cinema in the 60s was a slot car racing track, well 4 of them to be precise.

Do you have any idea who used to run it or where they are now?