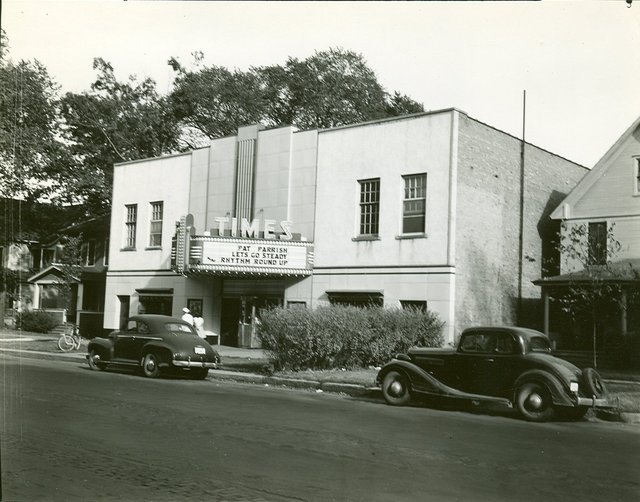 The Times Theatre opened on Christmas Day in 1941. A highlight of the theatre was its more than year long run of “The Sound of Music”. In the late-1970’s it became an adult theatre and then in the late-1980’s a video store. It was demolished in the early-1990’s. A fast food restaurant was built on the site.

The theater was actually built in a building that had housed the parking garage for a large apartment building. Kinda ironic that a parking lot would be turned into a theater?

One story told by the son of a prior owner of the theater was of a woman that complained that a male patron was getting “fresh” with her and had put his hand in her lap. When the police came it turned out that the man was less than “fresh” he was actually dead.

Here is an article from the Cedar Rapids Gazette dated 12/12/56:

Roy Metcalfe, operator of the Times theater, has leased the Palace theater from the Palace Theater Company, it was announced Saturday. He takes over the theater immediately, having acquired it on a long-term lease. He will also continue to operate the Times.

The Palace is a return-movie theater. The Times presents both first-run and return films. The Palace building continues to be the property of the heirs of A. J. Diebold and Mike Ford, the theater’s founders. The families have operated the theater almost continuously. William J. McGuire has managed it for many years. The Diebold-Ford Interests also own the State theater building in Cedar Rapids, which is leased by Tri-States theaters.

Metcalfe has been in show business for 26 years and in Cedar Rapids for 10 years. His wife assists him in theater operation. Metcalfe said Saturday that he plans to remodel the Palace.

The Palace theater was located on second avenue between third and fourth streets (railroad tracks). A parking ramp constructed in 1960 for US Bank now sits on that lot. Across from the street was the Isis theater. That building still stands and was home to Capri Cosmetology College and now a bar occupies that building.

The March 29, 1965, issue of Boxoffice Magazine said that Roy Metcalfe’s Times Theatre had been closed for extensive remodeling, and that it would reopen as the New Times 70 Theatre, with the first 70mm projection equipment in the Cedar Rapids area. The seating capacity was to be reduced, allowing for staggered seats in rows 40 inches apart, thus improving sight lines and increasing leg room.

The May 16, 1966, issue of Boxoffice published photos of the auditorium, lobby, and lounge of the New Times 70 Theatre. The auditorium, now with 523 seats, featured six abstract black light paintings on the side walls, satin drapes on the screen wall, and like the rest of the house had a color scheme predominantly of emerald and aqua.

The lobby boasted walnut paneling, contemporary furniture, and decorative panels of colored glass. The lounge, with black and white vinyl tile flooring that extended into the rest rooms, contained a low table and matching chairs of an ornate antique style which looked as though they might have been retained from the theater’s earlier period.

The earlier Boxoffice article mentions that Roy Metcalfe also operated the New World Playhouse in Cedar Rapids (by which they must have meant the World Theatre), and that he was President of a trade organization called the Allied Independent Theatre Owners of Iowa, Nebraska, and South Dakota. It also mentions that he had been operating the Times Theatre for fifteen years, and had recently acquired a long term lease on the house.

This ad was in the Cedar Rapids Gazette in November 1960:
http://tinyurl.com/dyn5np