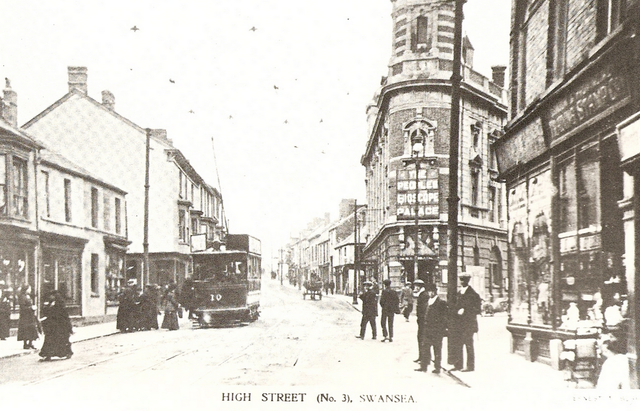 The Pavilion Theatre of Varieties opened in 1888 with 900-seats. It was designed by the architectural firm Bucknall & Jennings on a triangular site. The stage end being at the apex, which originally had a circular tower feature. There were two square towers at the other two corners. The exterior is built in brick, with plenty of stone features.

The auditorium is up stairs at first floor level, leaving the ground floor to house shop units and offices. Inside the auditorium there are two balconies, which have open iron balaustrades, the upper balcony still retains its original bench seating. The main orchestra floor is now leveled for use as a dancefloor.

The building was re-named Empire Theatre in 1892, then became the Palace Theatre of Varieties in 1901. At this time stars such as Charlie Chaplin, Lilly Langtry, Marie Lloyd and Dan Leno appeared on stage. By 1908, films were being screened as part of the variety bill and by 1912 it was known as the Swansea Popular Picture Hall and Peoples Palace. By 1923 it had reverted back to live theatre again and took the name Palace Theatre of Varieties for a second time.

In 1932 it was wired for sound and gradually went over to full time cinema use. Renamed the New Palace Cinema by 1937, it became the Palace Cinema until around 1954 when it went back to live shows as the Palace Theatre. Sir Anthony Hopkins made his first professional stage appearance here in 1960. By the early 1960’s it became a bingo club, then by the 1970’s a ‘private’ club. Closed in 1991 it then became a nightclub which has been through several ownerships, closing in 2006. The building was ‘For Sale’ in July 2007. On 8th September 2019 the vacant building suffered damage in an arson attack. A few days later it was announced that Swansea City Council were hoping to purchase the building from the owner who lives in Kent. If plans go ahead, it will be converted into community office space and retail space within the building and the exterior would be restored. Costing is put at £5million.

The Palace Theatre is a Grade II listed building.

A small exterior photograph of the Palace Theatre here:
http://www.pubsgalore.co.uk/pubs/56635/

The ‘Miss B. Elmore’ billed on the poster pictured above was actually Belle Elmore, a music hall artiste and wife of Dr. Crippen, who murdered her in 1910.

Exterior photo of the Palace from 1989 here:–

lostmemory; Sorry not available on DVD. It was released here in the UK on VHS tape back in 1992 by Warner who first released it in UK cinemas in 1962 (ABC release in Associated British Cinemas when I first saw it). It’s a good film, I watched it again, on TV here in London, a few months ago. It’s in b&w though.

I started in stage lighting at the Palace Theatre around 1960 as a member of Swansea Little Theatre. The theatre had be re equipped a few years earlier by Maudie Edwards who intended to run rep there,it failed. There was a Strand Sunset switchboard in the flys stage right,which controled three colour footlights and two batterns, 3 dips stage left and right and about 6 spots on No1 bar. The projection room was used for the ice cream fridge but still had two sets of steel pipes set in the floor with bolts at the top to take the 3 legs of the projectors. There was a managers flat at the back of the gallery, used for our wardrobe. An original gas sun burner was still in the roof space to ventilate the hall. A very large motor generator set was in a room at ground floor level at the rear which must have powered the projector arcs. A very scary basement under the building was used to store flats and props, some said it had been used as a morgue during the blitz on Swansea in the 1940,s. The ground floor was a pub not shops, and was flooded once by the drenchers being set off in the dark rather than the safety curtain on the way out of the building one night and they ran all night!! Lots more I could tell about Swansea Little Theatre at the Palace, we moved out around 1962/3 when lease ran out and owners wanted to demolish the building. I understand its up for sale again 2/2008.
Richard Havard.

What is Swansea doing to protect these buildings.
OK, the Elysium is past caring for, but the Albert Hall. especially, is there waiting to be made into what could possibly be a glorious concert hall for Swansea and surrounding area.

In a very poor state a year later