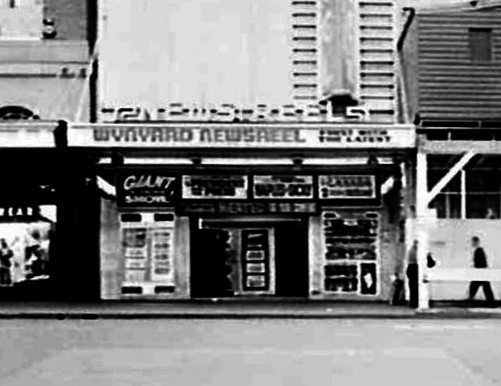 A newspaper report quoted Greater Union chief Norman Rydge as saying “the service which newsreel theatres was rendering in days of great happenings was so great that his firm decided to open one in the very hub of the travelling public”. In other words, a second theatre was built right next to super busy Wynyard Station. The Wynyard Newsreel Theatre opened in April 1941, as did the nearby World Newsreel Theatre.

Architect Guy Crick designed the theatre, the smallest of the city’s newsreel houses. It featured spacious lounge chairs and carpeting throughout and was air-conditioned. Daily programs started at 9.40 am and ran to 11pm. Unlike other news theatres, house lights come up between each 75 minute session, no doubt to encourage audience turnover.

The Wynyard Newsreel Theatre operated until 25th May 1966. It was then re-named Cameo Theatre screening feature films and was finally closed in late 1969. The theatre and surrounding buildings were demolished, and an office block was built on the site.